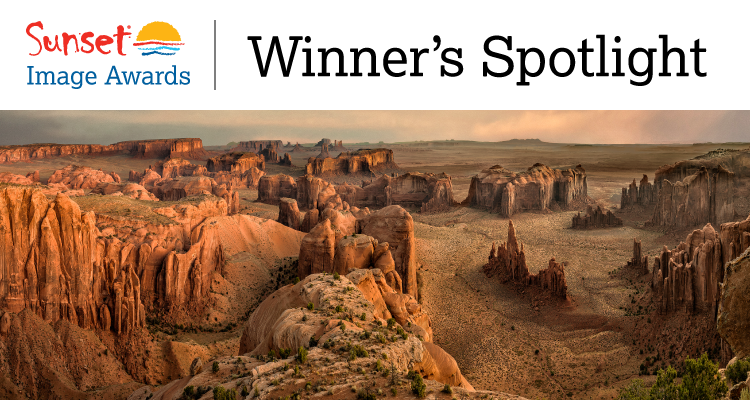 When LexJet hosted the Sunset Image Awards Click & Win Event earlier this year, the categories began to fill quickly. One of the most competitive groups was the Wildlife & Landscape category, with over 400 submissions. For Kenneth Martin, who won with “Sacred Lands of the Navajo”, and Jamie Steeno, who placed second with “The Courtyard”, there’s quite a story behind the captures.

The couple, based in Green Bay, Wis., each submitted a photo for the contest without telling the other. “Neither one of us knew the other was entering, and we live in the same house,” says Steeno. The judging came up, and Ken says, ‘I’ve got to get to the studio before the Click & Win judging’ and that’s how we found out the other entered.”

While both images are taken at Hunts Mesa, Ariz., they each have their own story to tell.

Steeno agrees. “We are instructors for Down Every Road Adventures. We explore the adventures ourselves, then we put together a workshop,” she says. “Here we are walking on these buttes that people are normally looking up at. So, we are getting a totally different view.”

While the views from the top are peaceful and serene, getting to that vantage point was quite literally a bumpy ride. “We loaded up a couple of SUVs and as we were on the ascent to Hunts Mesa, the road got extremely rough,” says Martin. “You’re buckled in tight, and you feel like salt in a saltshaker.”

Once they reached the top, they prepared for a nighttime shoot, which is when Steeno captured her image. “The Courtyard” is a black and white sunset image. “I chose to do mine in the old-time zone system. I felt that it brought more depth to the image, the old-time feel,” she says. “It’s in a historic area, sacred grounds. I thought that image would be better portrayed in black and white.”

While Steeno was focused on recreating a historical look, Martin chose a sunset shoot to capture every detail for “Sacred Lands of the Navajo”.

“It is a 28-image capture that I then photo merged in PhotoShop. It took 8-10 minutes to shoot,” he says. “I could have captured everything with a wide-angle lens, but the mesas and buttes in the far background would’ve just disappeared. I employed a 100 mm focal length which brought that background up closer.”

Taking first place in the Sunset Image Awards isn’t his only win for this image. “I got third in the Grand Imaging Awards. Just getting to the platform is an honor,” Martin says.

It’s not just about capturing a great image for an award-winning photo, it’s also about having the right equipment and media.

Both photographers are avid fans of Canon equipment – both cameras and printers – and Martin recently purchased the Canon imagePROGRAF PRO-2100 Printer from LexJet. “I got my first big printer, a Canon 8300, from LexJet. When it came time to replace the motherboard, I just purchased a Canon 2100, instead,” he says.

When it comes to media, both Martin and Steeno each have their favorites. “My favorite media is EPSON Premium Luster. For canvas, I use the Sunset Select Matte Canvas. I decided to go with the 24-inch printer so I could print 20-inch x 30-inch or 20-inch x 40-inch canvases. They are easier to handle than the larger ones I was doing on the 8300,” says Martin.

For some of the specialized work that Steeno does, she prefers something that offers a bit more shine. “For the light painting, cars, and motorcycles that we shoot, I love the Sunset Photo Metallic,” she says. “It makes the color pop. It’s amazing.”

For this dynamic photography duo, it’s not only capturing award-winning photos that keep them going, but also the adventure and, of course, their competitive spirit. “I’m continuously motivated to up my game to stay ahead of Jamie,” says Martin. “We’re very competitive. It keeps us on our toes,” says Steeno.

Looking to “Get Recognized”? Submit your photo through Sept. 3 for the next Sunset Image Awards and you could win $300 in cash if your image is selected by our judging panel. For more information on Canon printers or LexJet media, contact a LexJet sales specialist at 800-453-9538 or visit LexJet.com. 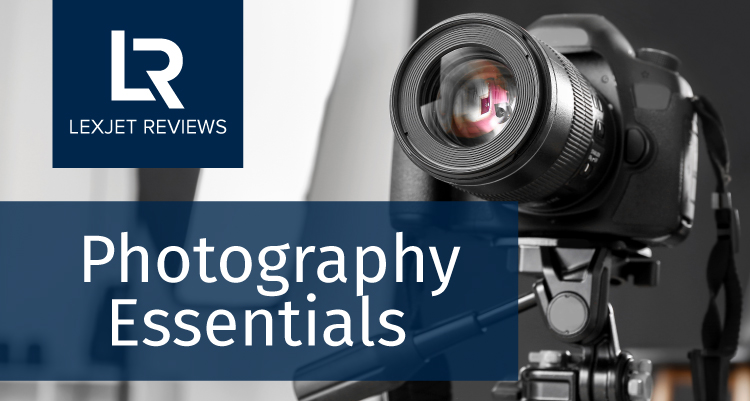 Whether it’s weddings or the holidays, photographers need to have the right products and the right support when busy season hits. In this edition of LexJet Reviews, C.J. Forker is here to discuss a few of the Photographer Essentials available from LexJet.

From printers to media to customer service, tune in to hear C.J. discuss:

Sunset Select Matte Canvas – The bright-white, matte-coated surface of this poly-cotton blend canvas provides a wide color gamut and, maybe more importantly, color consistency. The Oxford 2 over 1 weave is ideal for photo and art reproduction, but it’s also a good solution for home décor, indoor signage, and gallery wraps. Sunset Select Matte Canvas works with both dye and pigment inks and is compatible with current and legacy-model printers from Canon, Epson, HP, and more.

Canon imagePROGRAF PRO-4100 Printer–When it comes to investing in a printer, research is important. So is hearing from those who are using the same equipment you’re considering. Professional photographers Joel Grimes and Jeff Bowman offer their take on why they print their work on the Canon imagePROGRAF PRO-4100. The printer comes with a full set of 11 inks plus an optimizer and professional print and layout software. It also features automatic paper loading. Just drop your roll of media in and the printer automatically feeds the paper, eliminating fingerprints and smudges.

LexJet Premium Archival Matte Paper – Premium Archival Matte Paper is a smooth, neutral-white, matte paper for high-quality fine art, photo reproduction, and open-edition décor. This paper provides accurate color reproduction and high-contrast, high-resolution output, and is acid-free for a longer print life with pigment inks. It features a heavyweight, thick base, and an instant-dry coating that resists fingerprints and smudging. From fine art to wildlife, this is the perfect addition to any photographer’s media arsenal.

LexJet Customer Service – LexJet has been serving print service providers for more than 25 years, teaming with some of the biggest names in the printing industry. But, it’s LexJet’s excellent customer service that truly matters to its clients. From critical attention to detail to technical expertise, no matter what questions you might have, LexJet customer service is unmatched. Professional photographers Dennis and Cheri Hammon have been LexJet customers for years and say they couldn’t imagine going anywhere else.

To learn more about Photographer’ Essentials, visit our LexJet Reviews library, give us a call at 800-453-9538, or visit LexJet.com.

Looking for new ways to add creativity to your printed images? You can create one-of-a-kind pieces of art with a few creative choices. If you are using an aqueous printer, here are three tips to delight your clients and finish your photos with flare:

GIVE THEM AN EDGE. Three-time Sunset Print Award winner Kimberly Smith loves the Sunset Bright Velvet Rag, which she uses to distress the edges of some of her fine art prints. “The thickness [of the paper] means the tears on the edges are perfect for a soft, multi-layered look,” she says.

WRAP IT UP. Another way to impress clients is to turn their photos into wall art. Printing on Sunset Select Matte Canvas and wrapping it with the easy-to-use GOframe system creates a final image that is worthy of hanging in any museum.

ADD SOME SHINE. To bring a little extra shine to your images, try printing on Sunset Photo Metallic Paper. Aluminum prints are increasing in popularity, but if you don’t have access to dye-sub equipment, you can get a similar effect with the metallic photo paper. It’s a cost-effect alternative solution that is compatible with aqueous printers. The metallic paper can also be printed and face-mounted to acrylic, using a clear permanent adhesive, to create a unique piece of statement art.

If you are looking for new opportunities with your clients, contact a LexJet sales specialist at 800-453-9538. 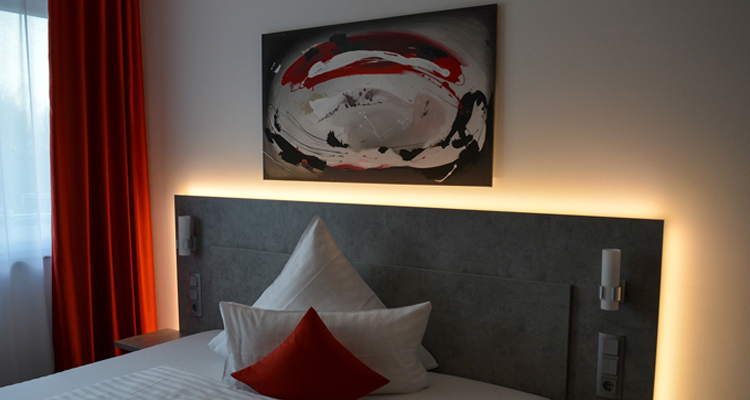 Including canvas wraps in any décor plan is an effective way to add a touch of style to every space, from the bedroom to the boardroom. Families want portraits in their homes while hoteliers want to brighten their lobbies, and print service providers can offer their customers many different solutions to create the perfect piece of art. Check out these three ways to include canvas printing in your product offering: 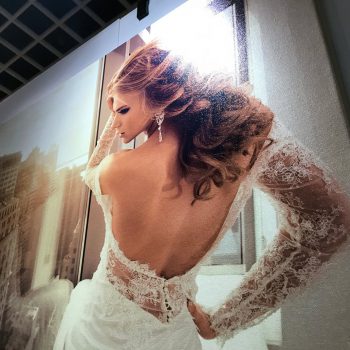 Specialty Canvas – Earlier this year, Fredrix unveiled Metallic Pearl and Metallic Gold canvases, which give photographers the opportunity to create glamorous portraits for weddings and engagements or eye-catching artistic photography prints. Fredrix Metallic Pearl Canvas adds a beautiful, ethereal, shimmering quality that will delight even the hardest-to-please bride. Fredrix Metallic Gold, a 2019 SGIA Product of the Year for Media – Textile – Canvas, offers an elegant gold finish that is perfect for high-end retail art, especially when printing with black ink. Both the Pearl and Gold are compatible with solvent, latex and UV-curable printers.

Work Space Canvas – Studies have found that art in the workplace can boost productivity, reduce stress and increase communication, so corporations are including art to enhance the employee experience. Working with local businesses and hospitality groups to design and create art that fosters creativity in the workplace and tells the story of the company culture and values. Fredrix offers a variety of aqueous and latex/solvent/UV-curable canvas products that are perfect for outfitting art-inspired work spaces. 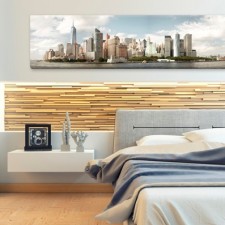 Custom Canvas –Photographers and PSPs printing with aqueous technology, can offer gallery wraps in portrait and photo packages, providing customers the opportunity to turn their family photos into art. Sunset Production Matte Canvas is a 100% polyester canvas that provides the look of cotton canvas with a 2-over-1 weave that delivers a consistent, repeatable print solution. Sunset Select Matte Canvas is a poly/cotton blend that meets the demand for a wide variety of art-reproduction and photo printing requirements. Use GOframe stretcher bars give the finished gallery wrap appearance.

To learn more ways to include canvas printing in your portfolio, contact a LexJet sales specialist at 800-453-9538 or visit LexJet.com.

As you head into the busiest season for canvas production, you need a canvas product that you can rely on for consistent results and reliable output, print after print. For nearly 10 years, award-winning LexJet Sunset Select Matte Canvas has been a top seller to busy print shops like yours. With a smooth, matte-coated surface, this poly-cotton blend is ideal for fine art and photographic reproduction, delivering exceptional color and detail. Plus, it’s lightweight, making it easier to stretch for gallery wraps. It’s the canvas of choice for David Little II of IGLIVISION in Loveland, Colo., who creates and wraps canvas photo and art prints (pictured).

Watch the video above to learn more about LexJet Sunset Select Matte Canvas, and stock up before the holiday rush hits! 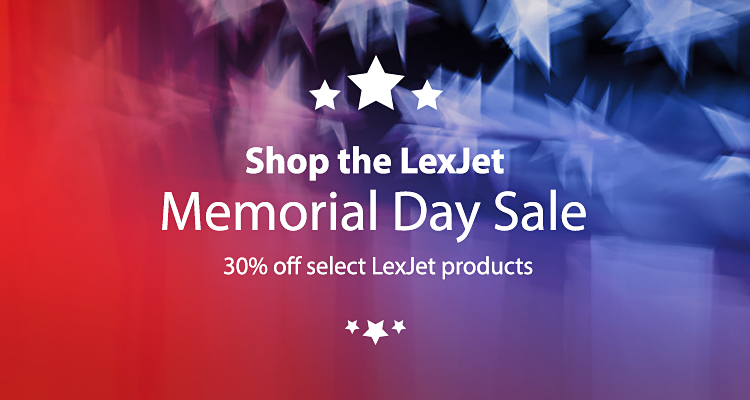 Today through Monday, May 29, take 30% off MSRP select LexJet products. During our Memorial Day Sale, you can save on a variety of our best-selling products for canvas, outdoor signage, photo reproduction, coating and more!

Click the product links below to learn more about these products and start saving now:

You can shop all weekend and into the Memorial Day holiday, or call your LexJet rep today to learn more at 800-453-9538.