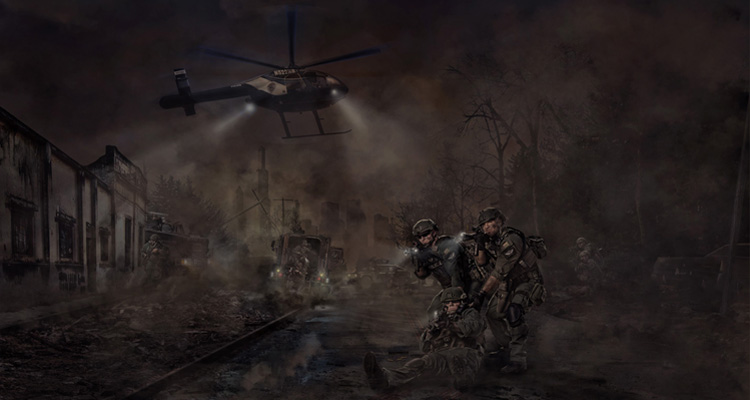 Capturing the men in action, Smith shot the image in daylight and digitally edited it to create the nighttime scene. The original photo was taken in a parking lot with a church in the background, but Smith reworked the background to create a more compelling story. A large print of his image is currently displayed in the police station.

When he’s not capturing kids and the big, jolly guy, Smith says he enjoys photographing law enforcement because “most people do not realize what they go through.” The work he does is multi-subject and multi-level, which keeps the viewer’s eye moving around the image.

Smith began his career in photography as a newspaper sports editor. He enjoyed capturing the stop action when photographing high school sports, but took a break to work as an e-commerce manager. He picked the camera back up when he had children.

In his studio, he enjoys photographing kids with Santa Claus because, “you never know what you’re going to get, and every kid’s story is different,” he says.

The competition entry of “Urban Assault” was printed on a Hahnemuhle fine art glossy baryta paper using a Canon printer. Smith enjoys entering print competitions because it is humbling.

“It takes guts for someone to enter and have their work judged,” he says. “You almost forget how much time you put into a work of art if it goes well.”

Melanie Epstein grew up in Sarasota, Fla., and recently graduated from Rollins College with a degree in Communication Studies, focusing on Public Relations. She is pursuing a career within the field of communication. At S-One, she works with the marketing team on social media and research.