Prints That Win: The Colonel in Twilight | LexJet Blog
BEGIN TYPING YOUR SEARCH ABOVE AND PRESS RETURN TO SEARCH. PRESS ESC TO CANCEL
Skip to content 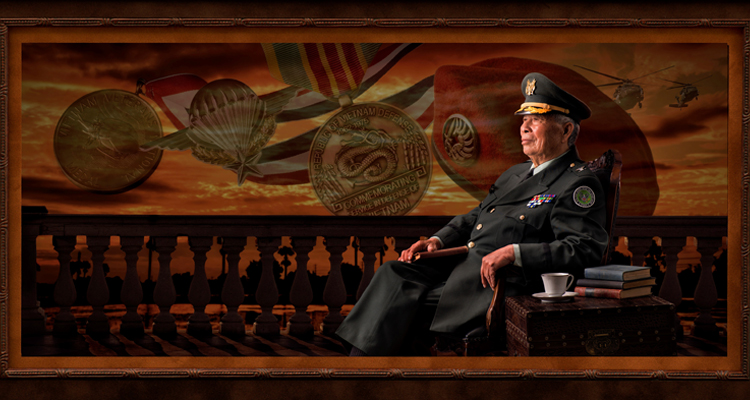 McNeilly captured  the shot of the Colonel after a sitting with the family’s videographer. “The family wanted me to light the video,” he says. “He sat there for a couple of hours and told his life story.”

The story was riveting — the man relived his military days as he and his family were airlifted out of the embassy in Vietnam, however, not all of his family members made it out, and have not been heard from since.

“He had to be emotionally rung out after sitting there and telling his story,” McNeilly says. “I was kind of rung out, too.”

Nevertheless, the intense session came to an end, and McNeilly was able to capture the stoic Colonel. He collected some military memorabilia from the man’s daughter and shot the balcony and background sunset separately. He then composited all of the images together. He finished it with matting and a bamboo inlay, which “gave it a great depth and sense of quality,” McNeilly says.

The district judges echoed the sentiments of the National Sunset Print Award judges in appreciating the storytelling McNeilly was able to capture, as well as the lighting perfection of the shot. “That’s why I’m a photographer; that’s what I love,” he says. “Lighting is everything for me, and is really the thing that has kept me interested in photography over the years.”

A 38-year veteran photographer, McNeilly is also no stranger to the Sunset Print Award. He won in 2013 for “Now and Then,” a Bonnie and Clyde-like portrait composite of a couple marking their 75th wedding anniversary.

“Image competitions make me work harder and think more about the product, even if I only enter four images all year long,” he says. “It’s the greatest educational thing a photographer can do. When you’re shooting to satisfy your peers and impress them, it’s a wonderful thing.”