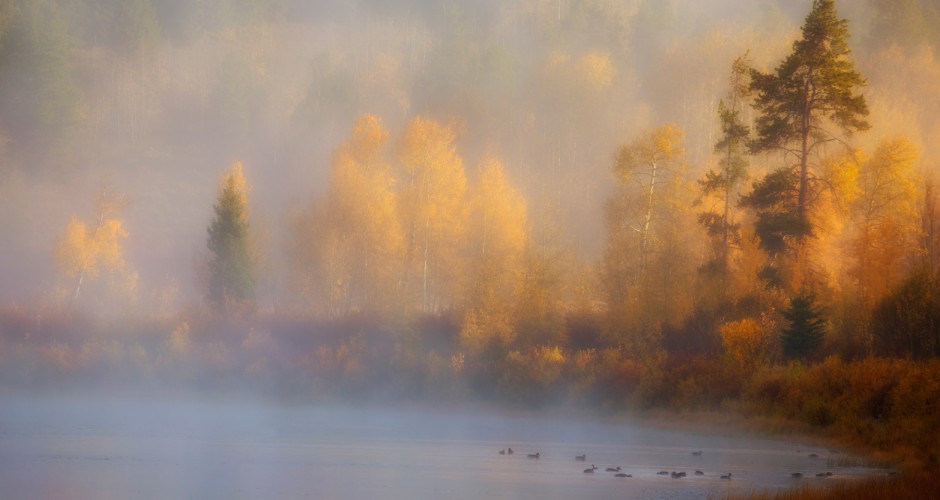 Gazing at photographer Dennis Hammon‘s image “Safe Harbor,” it’s easy to slip into a daydream of an early morning by the lake, the water still, the ducks circling together … and feel a sense of calm.

Yes, that’s exactly what he was going for.

The Idaho Falls, Idaho, professional landscape and portrait photographer says eliciting emotion is the key to making photos work. In fact, “Safe Harbor” was so effective, it won the Sunset Print Award, Best Certified Image, the ASP Award and took first place in illustrative/landscape photo at the Professional Photographers of Idaho annual convention.

“You want to project more emotion and feeling into the image,” he says. “I can remember the sounds and the scents … and I have to convey that to the viewer.”

A very foggy and overcast day could have been dark and moody, but was given a glimmer of hope thanks to the early morning sunrise, which Hammon expertly captured. “I grew up in the film era,” he says. “I used to always go out and shoot in the early morning.”

Editing-wise, he says, he only adjusted levels a bit in Photoshop before printing it on Sunset Photo eSatin Paper.

While “Safe Harbor” performed well, Hammon says he values print competitions like the Sunset Print Award because they’re a good “barometer for how well you’re doing,” he says. “Some people think it’s a fight, and yeah, there are prizes. But print competitions are a good way to keep working to improve your skills.”

The judges’ feedback, he says, is a great way to learn. “If they didn’t like the image, I want to know why … if they didn’t get it or didn’t feel it.”

“With ‘Safe Harbor,’ it’s peace and solitude … those are the feelings I’m trying to convey,” he says.