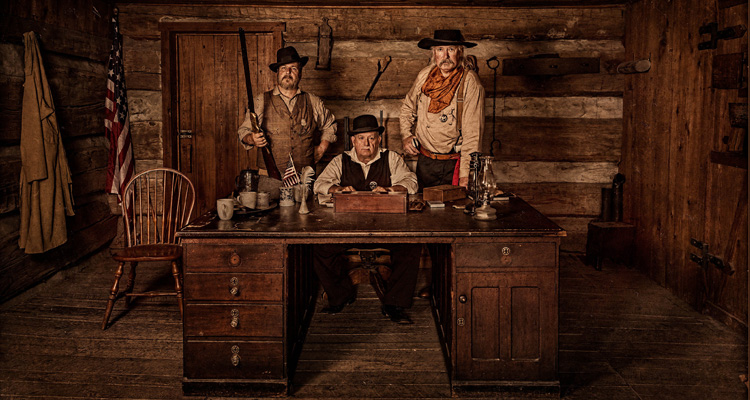 The project that really set ablaze her desire to view life from behind the camera was as team photographer for her daughter’s school swim team. She attended the meets and took pictures during the competitions throughout the year. At the end of the season, she presented a slide show at the team dinner. It was a great way to spend time with her daughter and, at the same time, learn the art of capturing special moments.

It is her innate ability to capture those moments that led her to her Sunset Print Award-winning print “Prepare There’s Trouble,” which she shot at a recent historical reenactment. In between “battles,” she saw a group of reenactors hanging out, laughing and talking. “They looked like they were waiting on some outlaws to ride into town,” she says. “I just had to tell their story.”

She approached the men and asked if they would mind if she took a couple of quick shots – they obliged. With her “lawmen” appearing ready for the arrival of a gang of hooligans and the light shining in from behind her, Blain captured a moment that looks as if it happened two centuries ago, rather than a few months ago. Blain says chronicling these Civil War reenactments is her contribution to preserving history. “Young people need to understand what happened in our country’s past and make sure it’s not forgotten so that it doesn’t happen again,” she says.

The vintage look was influenced heavily by James Steinmetz, a famous Carlisle, Pa. photographer, whose decades of contributions continue to live on since his death in 2008. In her early days, Blain would go to his photo shop a few days a week and spend time with him to learn the craft. He would develop her black-and-white images in a sepia tone on a heavy fibre paper, she would then add color to the images by hand with liquid inks and dyes. Today, a similar effect can be achieved using a digital media like LexJet Sunset Fibre Matte. To this day, the influence of Steinmetz can be seen throughout Blain’s body of work.

When preparing to tell a story, Blain is intrinsically aware of the importance of proper lighting, positioning within a scene and even how something as subtle as a faraway look in her client’s eyes can set the overall tone. This awareness has been developed through years of experiences as a model, as a photographer, as a student and as a competitor.