Prints That Win: Morning on Mormon Row | LexJet Blog
BEGIN TYPING YOUR SEARCH ABOVE AND PRESS RETURN TO SEARCH. PRESS ESC TO CANCEL
Skip to content 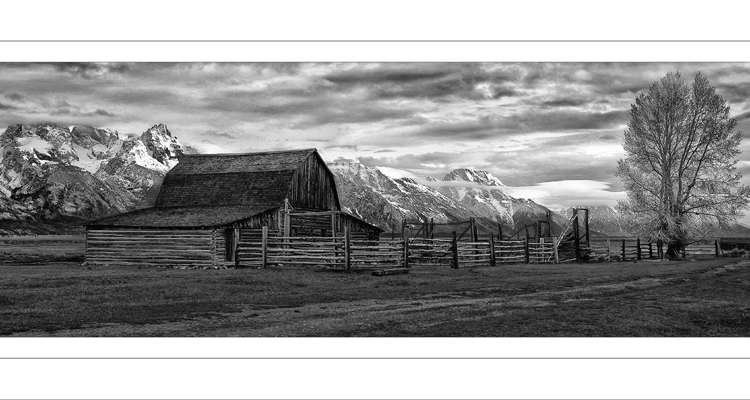 A few quiet days alone in Grand Teton National Park was highly worthwhile for Sunset Print Award winning photographer, Jaki Miller. Although she is no stranger to the beauty of Mormon Row, an early morning sunrise gave her an entirely new perspective.

“I got there about a half hour before it was even light enough to see and before anyone even got there. I just didn’t want to miss it.” She set up her Fuji X-T1 on a tripod and began to capture the simplistic beauty as the sun started to rise.

The early sunlight was breathtaking, turning the mountains shades of pink and purple. Miller, however, wanted the rustic barn to be the star. She converted the picture to black and white using the Nik Silver Efex Pro and allowed the scene’s true beauty to shine through.

“This picture is interesting because in color, you’re not sure what the focal point is,” she says. “When taking the picture, I adjusted my settings so the focus was on the barn but also so the mountains did not lose any detail. I really wanted your eye to go to the barn.”

A little cleaning up around the barn and some selective sharpening was all that was necessary for this shot to be a winner. “I normally do a lot of Photoshop, but this picture hardly needed it,” she says. “It was a beautiful picture right out of my camera.”

“Morning on Mormon Row” captivated the judges, earning a high score of 93 to secure the 2016 Sunset Print Award at the Professional Photographers of Ohio competition. It has also been entered in other print competitions, winning numerous awards and recognition. Surprisingly, this was Miller’s first year competing.

Miller began attending print competitions as a spectator to study what the judges did and did not like. “I wanted to up my game and separate myself from other photographers. I just wanted to be the best I could be,” she says. After studying and observing for many years, she finally entered and started winning.

“It’s all a learning experience. Do a little bit of research then just jump in and do it!” she says. “It teaches you more than anything to listen to the judge’s opinions about your work and to always keep improving.”