Prints That Win: Kidnapped by Tuscan Fog | LexJet Blog
BEGIN TYPING YOUR SEARCH ABOVE AND PRESS RETURN TO SEARCH. PRESS ESC TO CANCEL
Skip to content 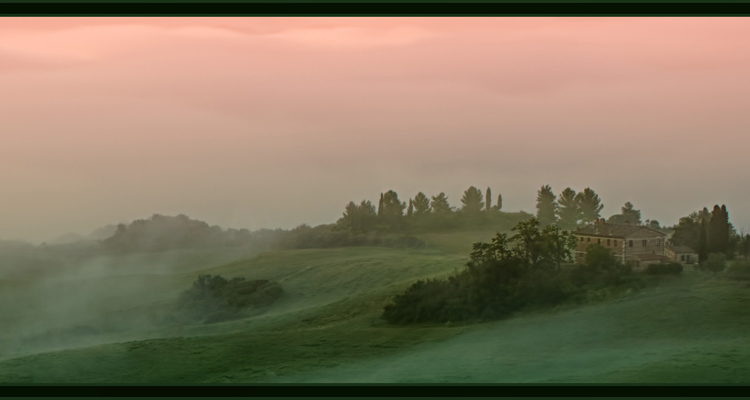 The soft colors of the rising sun, combined with the swirling fog, give this image an ethereal, pastel feel. Thompson is an artist of many trades, dabbling in everything from pottery to wood carving, sketching and painting.

“When I first went to college, I went as an art major,” he says. He left school to go into the military, and came back to college as a business major. “[My wife] was a photography major… and I started hanging out in the labs back in the day when they still did film,” he says. He discovered his love of professional photography through her, however, he still considers himself a student in many ways. “I’m really a neophyte,” he says. “I’ve got a lot to learn and a long way to go.”

An incredibly humble person, Thompson believes that his image’s success was partially due to luck. “Part of it is being in right place at right time,” he says, “the other part is having a little bit of vision and having other photos and work to pull inspiration from.” He draws this inspiration from a plethora of artistic outlets, including paintings, sculptures and other photographers. “I spend a great deal of time looking and observing art and images,” says Thompson with a laugh.

Despite Thompson being surprised at the image’s success, it’s easy to see why this stunning landscape was a favorite of the judges. The morning he took the photo, Thompson says he had a 30-second window to capture the photo before the fog became too thick again to shoot. Instead of being discouraged by the conditions, he was determined to find the positive. “I just thought, ‘I may never be back here again,’” he says, “so instead of packing up the equipment, I thought ‘why not get the best images I can with the situation we have?’”

For the Thompson family, photography is a way of life. Ty’s wife, Melissa, is also a professional photographer who has won Sunset Print Awards in past competitions. To ensure their images are displayed in the best format, they print on Hahnemuhle Matte FineArt Museum Etching paper. “We do all of our own printing,” he says. “We have a Canon imagePROGRAF iPF8300 that we purchased from LexJet a number of years ago, and 99% of the papers we use come from LexJet as well.”

Entering competitions is one way Thompson enjoys expanding his skill set and connecting with other photographers. “There’s a lot of people who are scared to put their work out there and be critiqued,” Thompson says. “But in this photography community, they’re extremely respectful and knowledgeable, and are critiquing because they truly want people to be better.”

He recommends that all photographers participate in competitions to improve both their taking and editing skills, citing it as a humbling and wonderful experience.

“The type of feedback you get is important because it’s easy to shoot a baby and have parents ‘ooh and ah’ because it’s their child,” he says. “But when you have people out there looking at this subject and critiquing without bias, that’s where you can learn.”