Prints That Win: Headin’ Home for Christmas | LexJet Blog
BEGIN TYPING YOUR SEARCH ABOVE AND PRESS RETURN TO SEARCH. PRESS ESC TO CANCEL
Skip to content 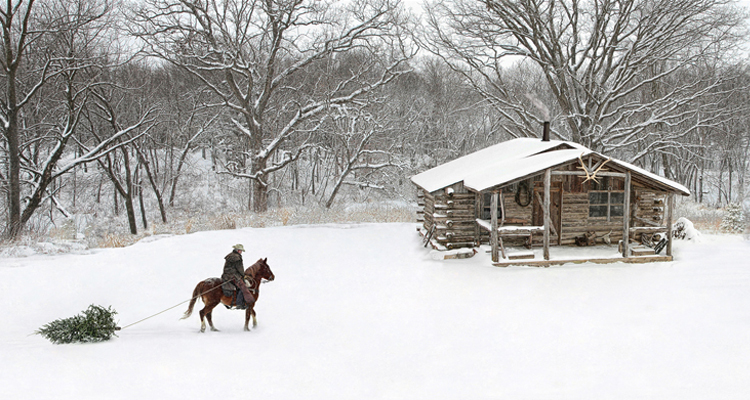 The tall, dark and handsome subject of Suzanne Fischer‘s award-winning image, Headin’ Home for Christmas, has been a muse for her in years past. She’s photographed the cowboy, Bob Beebense, while he’s been camping out, riding in a blizzard, standing with his horse and more poses over the past few decades.

But it was this quiet moment in the snow, bringing home the tree, that landed Fischer her first-ever 100-point score in the Professional Photographers of America’s Northcentral District in Iowa and the Sunset Print Award, thanks to the pristine snow and sweet storytelling of the shot.

“The first prints I entered into a competition were of the same cowboy,” says Fischer, who joined the Professional Photographers of America in the 1980s. “I’ve taken pictures of him and entered him every year.”

This particular shot was taken last December outside a cabin near Fischer’s home in Atlantic, Iowa. Fischer set up on a hill just north of the cabin to get the shot.  “I like to do shots in the snow,” she says. “I guess I’m a glutton for punishment.” She printed the image on a matte watercolor paper to give it a unique look.

Outside of her competition work, Fischer runs a wedding and portrait studio, focusing on families, seniors and babies. “I’ve found that entering print competitions has made me get better overall, in the studio and everything,” she says. “Especially with lighting and being more critical in posing. I hope it’s made me a better photographer over the years.”