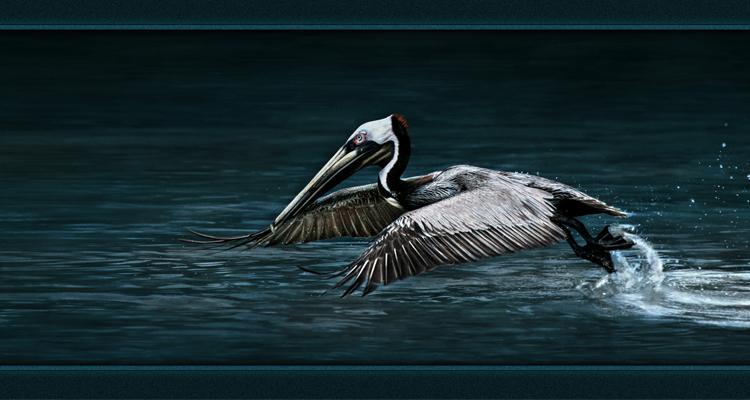 While stalking birds in the Everglades, Seymour, Wis.-based photographer Steven Kemp captured a Brown Pelican in mid-departure. Birds taking flight aren’t typically viewed as spectacular, noteworthy moments; however, the photography veteran has a knack for capturing the simple moments of life and transforming them into amazing ones.

The Sunset Print Award-winning photo, “Departing Flight,” was naturally exquisite and only needed minimal editing to be a winner. Kemp cropped out the trees and the shoreline in the background and smoothed out the rippled water. He printed the image on LexJet Sunset Production eSatin 250g photo paper, and it was ready for competition.

Photography has been an important part of Kemp’s life for more than 40 years. Coming from humble beginnings, Kemp began working at his aunt and uncle’s studio, Countryside Photographers, doing odd jobs around the office. “I went from breaking down and incinerating cardboard boxes to helping in the dark room,” he says, “and working my way up until I was finally behind the camera.”

Currently, Kemp still works at Countryside Photographers. He has become one of Wisconsin’s best photographers and was recently inducted into the Wisconsin Professional Photographers Association Hall of Fame.

As a self-proclaimed “different duck,” Kemp is one of a few photographers to have all four degrees from the Professional Photographers Association. While pursuing each degree, Kemp entered print competitions and used the judges’ feedback and inspiration from his competitors to his advantage. “I received my first degree from the PPA in 1985 and six or seven years before that is when I started entering print competitions,” he says. “I knew I wasn’t ready, but I put myself out there so that I could learn and grow as an artist.”

Kemp and the rest of the team at Countryside Photographers use competitions to improve their work, even if they have to make it up themselves. “Working in a studio is basically the same stuff over and over again,” he says. “The competitions help me stay fresh and allow me to do something different with my photography.”

Being unique and capturing unrecognized beauty is what separates Kemp from the rest of the pack. His favorite part of the job is helping his client’s see themselves in a positive way. “It’s amazing to photograph a person who doesn’t necessarily think they’re good looking and in the end, they say ‘Wow! Is that really me?'” Kemp says. “It’s so rewarding to get somebody to be proud of themselves or happy with their inner being.”

When he’s not helping his clients in the studio, Kemp spends much of his time mentoring other photographers and volunteering as president for “Home of the Hamburger,” a celebration put on in downtown Seymour. He owes much of his success to the photographers who took him under their wing to help in in the right direction. Their kindness and professional insight inspire him to pay it forward regularly. “After you’ve been helped so much, you’re encouraged to go out and help somebody else. But it’s just giving, and I’m a volunteer junkie.”