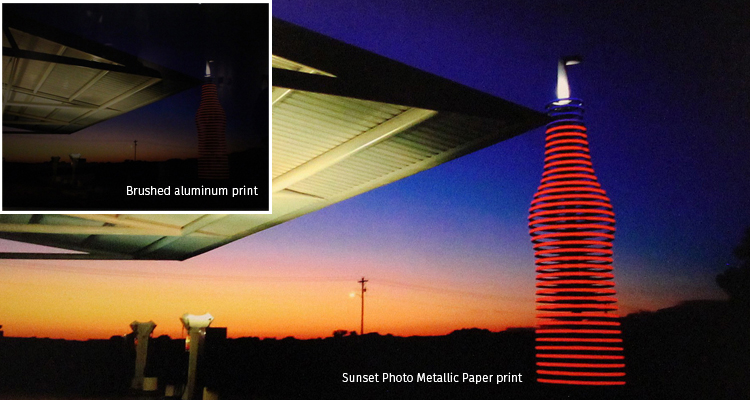 When Hollywood director Blair Hayes curated his movie-site images for a new exhibit, Light of Future Past, he set out to print them on brushed aluminum for a sleek, modern look. However, when he sent a few sample prints to the Shafer Art Gallery, at Barton Community College in Great Bend, Kan., where they would be displayed, the gallery struggled with lighting the images.

Using overhead spot track lighting, the light bounced off the aluminum and muddied the colors. “Blair uses dramatic contrast. The backgrounds are almost a coal black with one spot or source of illumination in that photograph,” said Dave Barnes, Shafer Art Gallery Director. “The brushed aluminum made the situation worse.”

After trying different placements, and even hanging the prints on a diagonal to get the light angles right, the gallery staff was at a loss. That’s when they turned to Chris Glassman, general partner at Casual Graphics.

“I explained that the direction of the print negates the illumination, due to the direction of the brushed surface,” Glassman says. “I suggested using LexJet’s Sunset Photo Metallic Paper, due to its large color gamut and outstanding ability to illuminate. Also, we found that laminating the printed pieces accentuates the unique characteristics of the media by seemingly magnifying the light coming in, reflecting a more saturated color experience.”

Glassman had similar luck when producing 6-foot-tall prints of neon-accented bugs on black backgrounds, which were printed on Sunset Photo eSatin Paper 300g and finished with a gloss coating.

“When a customer has a piece that demands bright saturated colors, [the Sunset Metallic] is our go-to product,” he says. “Dave stated to me that if it weren’t for Casual Graphics, the show would not have happened due to the lighting issues, and in turn, I must state that if it wasn’t for the LexJet media, I wouldn’t have been able to provide them with a cost-effective alternative solution to aluminum prints.”

Hayes has directed commercials, television and movies, including the cult classic, Bubble Boy, starring Jake Gyllenhaal. His dramatic images were captured mostly during location scouting, and Barnes and he connected through a mutual friend, which led to the exhibit, which runs through the last week of October. 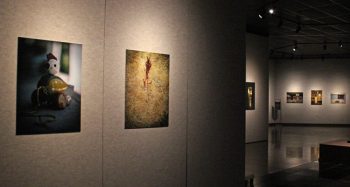 “I’m fortunate enough, being a director, I get to go all over the world – and mostly America – and get exposed to things that one might think are just ordinary objects, but when I see them with my eye for the first time, I can’t help but – I find them fascinating,” Hayes says. “My work is very Americana. … I love our country, the people who make up our country and what it’s all about.”

Hayes was hoping to create images as well as an experience for the viewers: “With the metallic paper, as you move past the photograph, side to side, things start to reveal in the shadows.” He said it was a similar experience with the brushed aluminum, but the gallery lighting deadened the effect. The Sunset Photo Metallic Paper, however, was simply a “more practical and equally effective way to show off the photographs,” he says.

When printing Hayes’ work, Glassman used his Canon imagePROGRAF PRO-Series 6000 to ace the job. “Interestingly enough, some of Mr. Hayes’ photos had subtle tonal ranges in the darks, and this media improved and distinguished those incredibly well. The gloss laminate helped take it a step further, which was a happy surprise.

To achieve a specific desired printed look, Glassman emphasizes that color profiling is a must, regardless of the printer or media choices. “Profile your printer with your chosen media and calibrate when critical jobs arise, or when the appropriate amount of usage has occurred on your printer, and also if you have a hardware change, like printhead replacement,” he says.

To learn more about applications using Sunset Photo Metallic Paper, or if you need profiling assistance, call a LexJet print specialist at 800-453-9538.

Last year, we featured another print project by Glassman and his team at Casual Graphics. He reproduced a giant painting by artist Brian Jarvi titled “African Menagerie.” The painting captured 210 species living in Africa now, and was 17 years in the making.

Glassman reports that the original painting is currently for sale, valued at $6 million, and Glassman’s reproduction is now hanging in a castle in Switzerland. Jarvis is heading back to Africa for more research and public awareness.