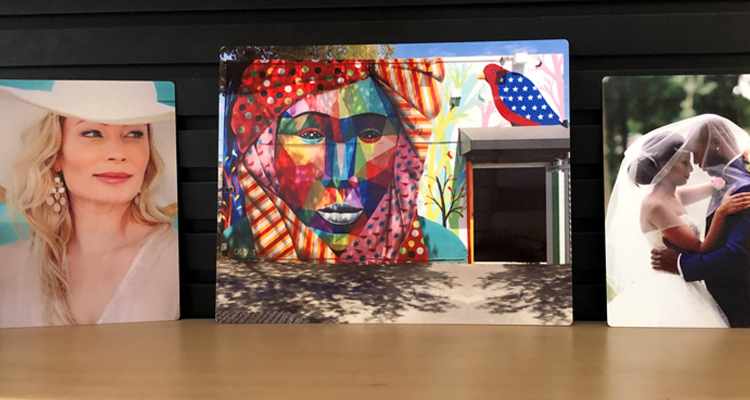 In the 1970s, 60 Minutes Photo was the first one-hour photo development lab in West Palm Beach, Fla. Today, its ability to continue to offer innovative solutions with top-notch, in-person customer service has helped keep it in business during a time when online competition keeps heating up.

“Photo labs are becoming a dying breed,” says Renea Hutchings, who owns 60 Minutes Photo with her husband, Harold. “We’re more of a custom lab. People walk in and we have consulting where we can pull up their image and show them how it will look at a certain size. We work with both professionals and amateur photographers. Today, we’re one of the only all-around labs in Palm Beach County.”

The team pairs that customer-intimate approach with photo restoration work as well as up-to-the-minute photo reproduction trends, such as acrylic glass art, photo books, t-shirts, puzzles and metal prints, utilizing a variety of print technologies and substrates, based on their customers’ preferences. 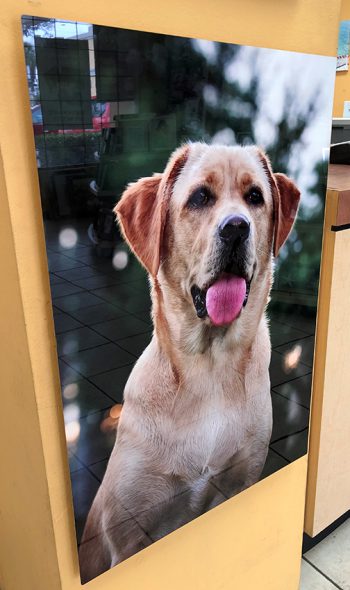 The metal prints are particularly popular these days, Hutchings says, because of their sleek look and color reproduction. “If you have a really good shot, and we sublimate it on metal, we can get a really good print,” she says.

Her production team opts for Chromaluxe Photo Panels and LexJet InFuze Rigid Substrate Dye-Sub Paper for transferring the image to the metal. “Our guys like the InFuze better than the others they’ve used — it feels thicker and it’s more  porous, so it holds more ink when we sublimate it — it heats better and works better, especially with the photo panels,” Hutchings says.

When finishing the panels, the 60 Minutes team adds customized hanging fixtures with stainless steel buttons and sticks that are adhered to the back and can hold panels as large as 30-by-40 inches — and they deliver the final product within just a few days.

“We have some interior designer customers in Wellington, which is a huge horse-show world,” she says. “Their photos can be sublimated onto metal and hung outside on patios or in these multi-million-dollar horse barns. You can pretty much just squirt them with a hose and wipe them off. They’re pretty indestructible”

Another popular wall art item the team produces is photos printed Sunset Photo Metallic Paper and adhered to acrylic. “The image just pops,” Hutchings says. “It’s not like looking at a regular print.” She says portrait photographers, restaurants, sports bars and healthcare facilities are just a few of the types of customers opting for these two dynamic options.

To learn more about photo reproduction options, connect with a LexJet print specialist to day at 800-453-9538.

Using high-end photo or fine-art papers like LexJet’s Sunset Photo eSatin Paper 300g or Sunset Hot Press Rag 310g delivers the premium, darkroom-style results that photographers and fine art reproduction printers demand. However, the thicker papers have one side effect: They curl as they come off the printer.

As we demonstrate in the video above, getting the curl out of your finished photo prints can be simple with a few items you already have in your facility. You’ll just need:

Watch the video above, which will walk you through the quick steps. The whole process only takes a few minutes. Once your print is de-curled, you’ll be able to make a much nicer final presentation to your customer. What once housed print production as the couple beat the pavement to sell their services is now home to something garages were originally intended to house… a vehicle. In this case, it’s a fine driving machine manufactured by Bavarian Motor Works. The Rogers have moved their business from the garage to a large print production facility in Louisville. The growing and dynamic company has realized the fruits of their hard labor in the early years and has become a fixture in the Louisville area.

The garage, meanwhile, has been transformed into something completely different with the use of a variety of inkjet media from LexJet.

Rogers went all out, wrapping the walls in faux brick with Photo Tex from LexJet, printing BMW photos on LexJet 8 Mil Production Gloss Photo Paper, laminated with D&K 6 Mil UV Textured Vinyl PSA and applied to 1″ Gator Board with LexJet GraphicMount White Adhesive. There are 1″ cleats on the back of the panels that attach to the wall. The floor graphic was printed on LexJet Simple Adhesive Vinyl SUV – Gloss (5 Mil) and laminated with the D&K Textured material. Rogers says he went with a more permanent vinyl, rather than a more temporary floor graphic material that can be easily removed, since he expects it to be there for years to come.

The brick graphics essentially frame garage, complementing and contrasting for a blend that is rugged, classic and classy.

Rogers created one large image, cropped each panel at about 50 inches wide, printed them individually and applied them in order so they lined up. Rogers says it took about three hours to apply the wall graphics, with some more to come soon. Check back here for updated photos in the next week or so… Its smooth, bright white, instant-dry surface provides the high ink-load retention needed for saturated, brilliant colors. It can be thermally laminated and is universally compatible with dye and pigmented inks.

KODAK PROFESSIONAL Inkjet Photo Paper, Matte / 230g is designed for the discerning imaging professional interested in higher-end applications like photo and fine art reproductions and décor for home and office.

It has a smooth, neutral-white matte finish with an instant-dry coating that prevents smudging and fingerprints, providing hassle-free print production. It is also acid-free for long-lasting, non-yellowing prints when used with pigmented inks

For more information about these new papers, the KODAK line at LexJet or anything else you need help with, contact a LexJet customer specialist at 800-453-9538.