END_OF_DOCUMENT_TOKEN_TO_BE_REPLACED

Last year, LexJet unveiled a full suite of dye-sub products, including printers, transfer papers, heat presses and ChromaLuxe aluminum photo panels. In order to be keep up with the increasing popularity of dye-sub technology, we recently added an exterior product to the mix: ChromaLuxe EXT Extended Life Metal Prints.

The UV-resistant coating on this product significantly reduces fading, is easy to clean and resists graffiti, chemicals, weather and scratching. ChromaLuxe EXT panels are versatile and can be used to create vivid outdoor exterior art displays, photographic directional signage and tabletops. The outdoor durability is guaranteed to last for two years for photographic prints and three years for signage-based graphics.

It also works great for long-term indoor applications where there is excessive exposure to direct sunlight.

For more information on the new ChromaLuxe EXT photo panels and other dye-sub opportunities, call your LexJet sales specialist at 800-453-9538 and download this flyer. 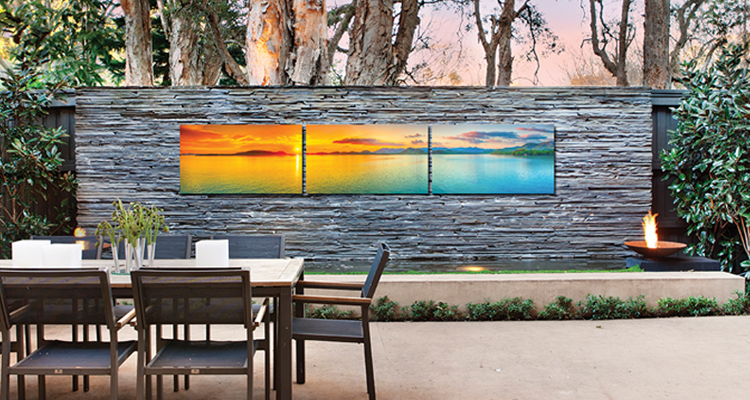 Available to ship mid-November, ChromaLuxe EXT gloss white metal print panels will allow you to produce the lasting, vibrant colors you expect from ChromaLuxe panels with UV resistance that can stand up to outdoor elements for at least three years. Now, the masterminds at ChromaLuxe are bringing all those options outside with the new ChromaLuxe EXT Extended Life Metal Prints. A new UV-resistant gloss finish provides the same dynamic image quality, and also stands up to weather; plus it’s easy to clean and resistant to graffiti, scratches and chemicals. The new ChromaLuxe EXT aluminum has been thoroughly tested to withstand wind and impact, making it ideal for outdoor artwork, photography, signage and all types of displays. While photo reproduction is a favorite application, ChromaLuxe can also be used for branded logo work, directional and informational signage, menu boards, cabinetry, wallcovering and more.

The new panels are available in 11 standard sizes and full 49-by-97-inch sheets. For more details, download this flyer, and call a LexJet representative at 800-453-9538 to discover more ways to use the all new ChromaLuxe EXT outdoor metal panels.

When his customers started asking for ChromaLuxe metal photo panels, James Marks of PPR Pix in Atlanta, Ga., started researching how to add the colorful photo reproduction option to his operation. That also included the purchase of a new Epson SureColor F6200 dye-sublimation printer.

“We had been looking at getting into metal and there isn’t another local place in Atlanta to do metal printing,” Marks says. “Some of our customers had asked about it, and so we wanted to get our toes in there and jump.”