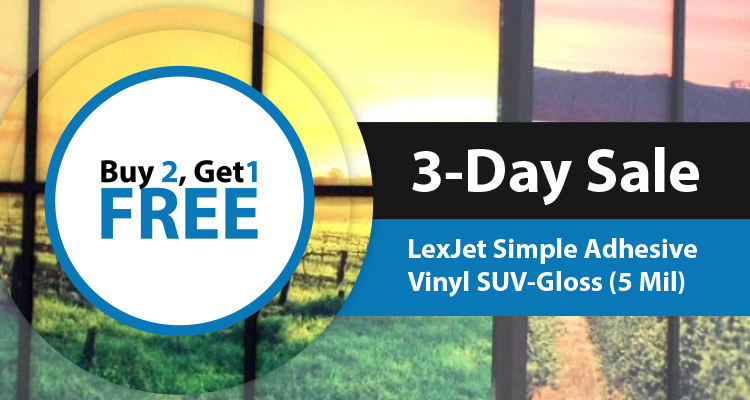 Shop now to take advantage of this buy-2-get-1-free 3-day sale on one of our most popular products: LexJet Simple Adhesive Vinyl SUV – Gloss (5 mil). Printers and installers love this versatile permanent adhesive vinyl thanks to its economic price and 5-mil thickness that makes it easy to handle for applying to various substrates.

If you’re looking for a multiple-use adhesive vinyl, this 5 mil gloss version is a great solution. LexJet Simple Adhesive Vinyl SUV – Gloss (5 mil) can be used indoors or out for signs, POP displays, mounted graphics and more. Used outside, this permanent adhesive vinyl will last three to five years.

Over the past few months, Berea Printing‘s production manager, Phil Crawford, has put two print materials to the test, reviewed their performance, and disclosed the results through video (click on the links below to see the videos):

This time around, Crawford reveals a new find: LexJet Simple Adhesive Vinyl SUV – Gloss (5 Mil) can double as a dry-erase board when used with the HP Latex Printer and HP Latex Inks, based on his testing. In most cases to make a graphic dry-erasable, you need to use a special laminate on top of the print.

“We’ve had requests from customers who use dry-erase boards for presentations who would like to mark on top of presentation graphics and use dry-erase markers. We found that this vinyl with the HP Latex Inks works for that application,” says Crawford. “The HP Latex Ink will stick even if you use a little water to wipe off a ballpoint pen mark. It’s a nice item to offer because a lot of corporations, businesses and schools are looking for a dry-erase solution, so we should market it more.”