Prints That Win: Elsa | LexJet Blog
BEGIN TYPING YOUR SEARCH ABOVE AND PRESS RETURN TO SEARCH. PRESS ESC TO CANCEL
Skip to content 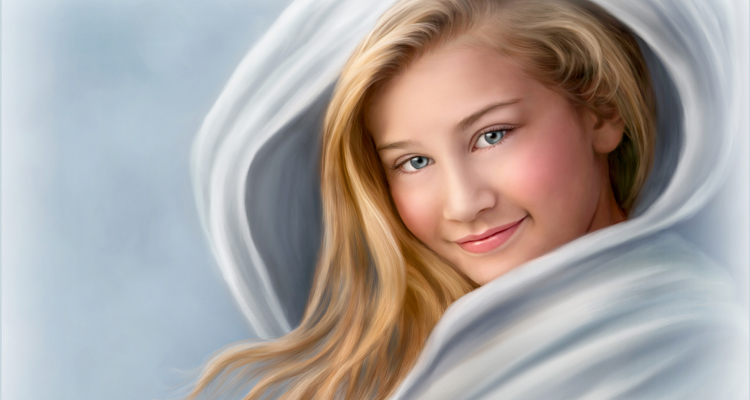 The image has been edited to appear as a hyper-realistic painting. The light tones and soft texture, combined with the model’s serene facial expression, give the painting an exquisitely ethereal feel.

Howe’s editing philosophy centers on technique. Light direction, composition, technical excellence and impact are what he looks to capture in his unique imagery. “Light is a beautiful tool,” he says, “and we’re dealing with a two-dimensional subject to give a three-dimensional feel … the inspiration comes from being in the situation and feeding off elements that are at play.”

Howe had an early start in photography at age 8, when he began participating in a 4H program. He continued with photography throughout his school years, working on the annual newspaper staff in high school, among other projects. “I got paid to do my first wedding when I was 14 years old,” says Howe, and he’s been shooting professionally ever since. Most of his training came from working with other photographers and being involved in Professional Photographers of Nebraska, who presented him the Diamond Fellow of Photography, the highest degree possible.

Over the years, Howe has participated in – and won – many competitions. “The fastest way to improve your work is through competitions,” he says. A friend had been trying involve him for many years, but he was hesitant at first, unsure of the value. However, he now considers it an essential part of his continuous learning process.

Elsa captures both the beauty of the girl and Howe’s editing skills, earning it the prestigious Sunset Print Award at the Professional Photographers of Nebraska Winter Print Competition, in addition to the district Sunset Print Award.  It’s hard to imagine this girl – who closely resembles model Gigi Hadid – facing bullying. Her resilience and eloquence are portrayed beautifully in Howe’s work, making it well-deserving of this award.

“I called her right after the awards banquet. She is a pretty shy little girl, but her mom said she was grinning ear to ear,” says Howe, pictured with her at right. “She gave me and my wife a big hug when she came in for our photo.”