In the first part of our four-part series, Latex expert Timothy Mitchell discussed the differences between the Latex 700 and 800 Series. In part two, he talks about some improvements over previous generations of latex printers.

In the video above, Mitchell takes you deeper into the technology improvements in these four new printers. These improvements can decrease your turn-around time and enhance your output from curing temperature to printheads to modular ink.

With previous generations of latex printers, it was nearly impossible to use heat-sensitive media like polyester, polypropylene, or even paper. Printing on these media was possible by reducing the temperature and amount of ink and slowing the speed. But in doing so, the colors lost vibrancy, and the graphics took longer to produce.

With the curing temperatures lower – from 230° F to 195° F – you don’t have to decrease speed or ink levels, resulting in better saturation and warp-free graphics. “These printers, because they are running at such a lower temperature, it’s like an entire shift,” says Mitchell. “Everything I run is now going through the printer faster and at a lower temperature. As a result, I can put more ink down, and there’s no sacrifice in quality.”

HP made several improvements to the new printheads. There are now 3000 nozzles instead of 2112, meaning if there are clogs or low-performing nozzles, other nozzles will pick up the slack. The size of the drop is now 10 picolitres rather than 12. That means better dot placement for fine text and shading. Mitchell explains that other improvements include an elliptical shape nozzle and microcirculation to improve the performance of the ink.

“It’s a smaller drop, better drop accuracy with the elliptical nozzle, the printhead is user-replaceable, inexpensive, durable, and water-based,” he says. “The printheads are completely new, and they complement this new printer wonderfully.”

The new modular ink system has three components: the optimizer, increased pigments, and the overcoat. The optimizer – which keeps everything fixed to the media – has always been an essential part of HP’s ink and has not changed. The increased pigment gives this generation of printers an extensive color gamut.

The third component is the overcoat. The overcoat was part of the ink with the 300/500 series printers. But now, the overcoat has its own printhead and can be turned on or off, depending on the application. As Mitchell explains, “If you’re using a laminate workflow – cold lam or liquid lam – you turn the overcoat off. It will give you a better bond between the laminate and material.”

Here is a quick overview of the technology behind the new printers. According to Mitchell, this generation is not about making modifications and changing the name. These printers are continuing to build on HP’s success with latex technology. “Almost every part of the printer has been adjusted, improved, updated, and innovated. It’s a new latex introduction,” says Mitchell. “But it still retains the hallmarks of latex: water-based ink, environmentally friendly, and safe for the user.”

The 800/800 W have 3-liter boxes and a reservoir tank, while the 700/700 W have 1-liter boxes with no reserve. Why does this matter? You get a lower cost per liter and a longer run time. “If you run out of ink in the box, it [the printer] will automatically switch over to the reserve tank,” says Mitchell. “It’s virtually impossible for you to run out of ink while unattended.”

The 1-liter inks in the 700/700 W series is an upgrade over the 775 mL of previous generations, but without the reservoir tank, it is possible to run out of ink if you are doing extended or unattended runs.

While both series are faster than previous models, the 800/800 W is about 15% faster than its counterpart. So why are these printers faster than other generations? According to Mitchell, it’s due to the lower curing temperature. “Instead of printing at 230° F or 240° F, I’m going to be printing at 200° F or less, with more speed,” he says. “So, the prints are coming through quicker and at a lower temperature. More speed and more impact with less thermal deformation.”

One very noticeable difference between these two series is the flashing status beacon, a green/yellow/red light on the 800/800 W. Much like a traffic light, this multi-colored light will let you know if the printer is idle (solid green), working (flashing green), needs attention (flashing yellow), or completely stopped and something is wrong (flashing red). The beacon is an excellent way for production managers to run several printers and quickly identify any troubles with the fleet.

These are just a few of the differences. Be sure to click on the video above to learn more about the Latex 800 and 800 W from the 700 and 700 W and check out the HP printers in The LexJet Experience. Check back over the next few days to catch the rest of our four-part series. 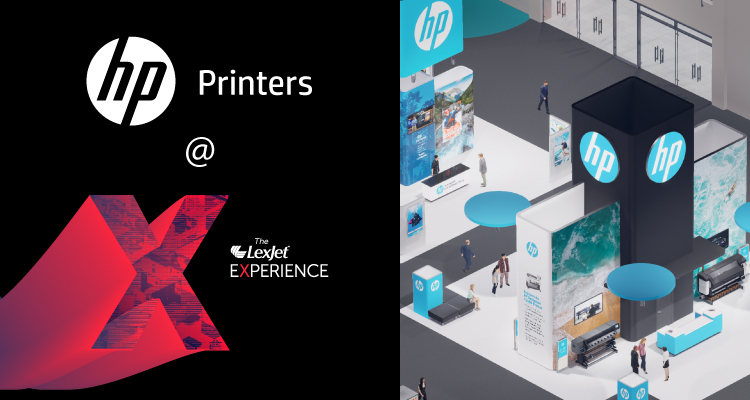 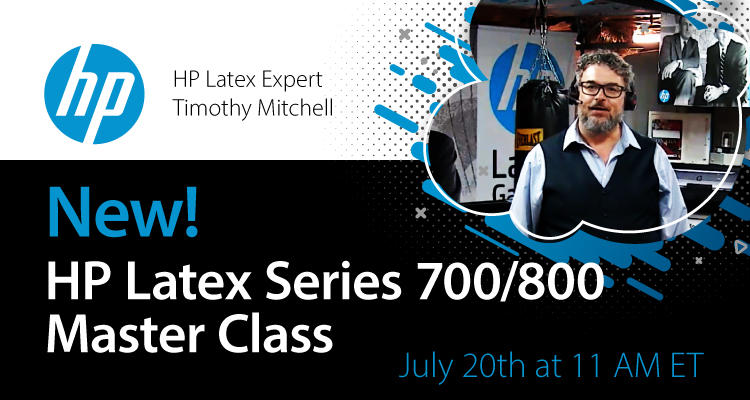 Next month, Timothy Mitchell, HP’s Latex Applications Architect, is presenting a live 2-hour master class on the HP Latex 700 and 800 series printers.  The free training will be Tuesday, Jul 20, 11 a.m., and you can register HERE.

Unlike the monthly Latex Academy, this master class will take an in-depth look at HP’s innovative new latex printers. Mitchell will be hosting the event live from the HP Demo Center in Alpharetta, Ga., giving you a chance to see the new printers in action as he prints on various media types and shows you the impact the new white ink can have on your images.

Media Types – Discussions about the various media options as well as ideal choices for mechanical settings and preset selections.

White Ink – Because white ink is new to many people, Mitchell will go through Onyx, Illustrator, and Photoshop, to show you how to create printer and software presets to get results quickly.

Accessories – The new latex printers offer a full subset of accessories, learn when and how you can, and should, use them.

Specialty Applications – The 700 and 800 are going to give you an entirely new world of specialty applications. Mitchell will show you a few – including paper and polycarbonates – that run exceptionally well on the 700/800.

Other topics include speeds and feeds, temperature settings, presets, and color management. If you are already using latex technology or if you are checking it out for the first time, you won’t want to miss the chance to see what these state-of-the-art printers can do. As always, Mitchell will take your questions at the end of the session.

Don’t wait, space is limited for the inaugural class, so register today. If you have questions, contact a LexJet printer specialist at 800-453-9538 or visit our HP Latex Resource page for more information.