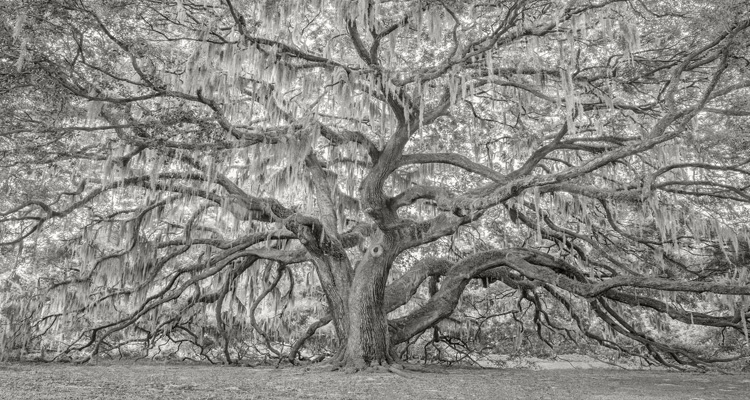 A self-proclaimed “print competition junkie,” Grandville, Mich. photographer Kari Douma is a judge’s dream contestant. “To me, it’s absolutely mesmerizing to hear what the judges have to say and to see all the beautiful images,” she says. “I would go to print competitions and write down every comment they said, what they liked as well as the negative things.”

It was in 2008 that the master photographer decided to dip her own toe into the print competition world. Since then, she’s learned a tremendous amount, and landed the Sunset Print Award for the Professional Photographers of Michigan organization’s annual competition with her image, “Aged Gracefully,” pictured above.

“I just loved the tonality of the image as soon as I shot it and turned it to black-and-white,” she says. “And that’s always been on my bucket list: photographing an older, live, mossy oak.”

In her regular business life, Douma shoots families, weddings, newborns, seniors and corporate portraits. During her down time, her hobby is landscape photography. This shot was taken during a photo trip in Savannah, Ga. between 5 and 6 a.m. “That’s when you get the best light,” Douma says.

The image was part of a 365 project she had undertaken, shooting an image a day for a year. Each day, she would select the photo she liked best, and at the end of the year, “Aged Gracefully” beat out the rest of the year’s images.

In fine-tuning the image, Douma says she enhanced details with dodging and burning in Photoshop, paying attention to highlight areas that were too bright and removing distracting elements in the grass below the tree.

“I printed it on a watercolor paper, and one judge said the paper didn’t produce enough contrast,” she says. “But another said if it had more contrast, she wouldn’t have liked it as much. At the end of the day, it’s just six people’s opinion.”

The competition work and critiques stay with her, she says, and has even impacted her day-to-day portrait work. “One year I entered a wedding picture, and one judge didn’t like the placement of the groom’s hands. Now, when I shoot a wedding, I think of that every single time.”