A New Spin on Showing School Spirit | LexJet Blog
BEGIN TYPING YOUR SEARCH ABOVE AND PRESS RETURN TO SEARCH. PRESS ESC TO CANCEL
Skip to content 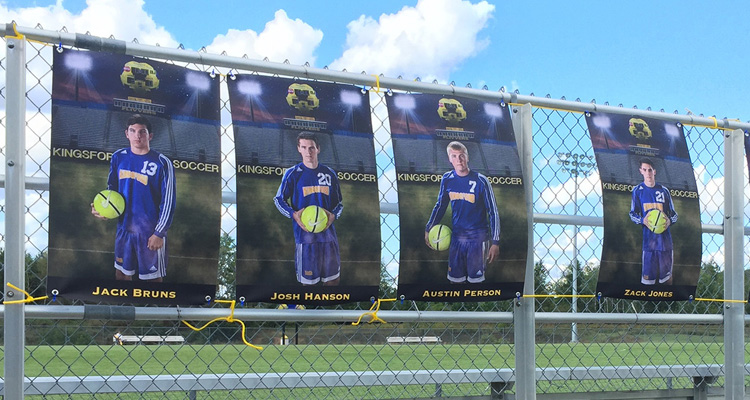 Banners displayed during high school sporting events are nothing new. But photographer Carl Caylor of Photo Images by Carl in Iron Mountain, Mich., put a different spin on the whole concept.

During his son Wyatt’s senior year, he took portrait photos of all of the senior football players, added some special effects and printed them out poster-size. With the jumbo portraits, he created a 72-foot-long stand that was displayed during the team’s home games. “We really wanted to use it as a community project to help promote the football games,” Caylor says.

Using his Canon imagePROGRAF iPF8400, Caylor printed the individual portraits on LexJet TOUGHcoat ThriftyBanner and affixed them to the stand using Banner Up adhesive grommet tabs. The combination was quite durable for the entire football season, Caylor says.

“We had a few games with really nasty weather, and they really held up great,” he says. “The ThriftyBanner got wet, but after the game we hung them up to dry, and everything was fine. It was amazing for a product that’s not really rated for outdoor longevity.”

The football banners were such a hit, the athletic director asked to expand the project for all of the school’s 44 senior athletes. Caylor ended up making more banners for the soccer team, volleyball team and more. “The overwhelming excitement was phenomenal,” he says. Then the word got out to other schools that decided to add a promotional aspect with business sponsors for each of the athletes. Caylor made smaller, matching signs using LexJet Print-N-Stick that could be displayed at the businesses. He also ended up making locker decals and “cheer sticks” with extra space he had on his prints.

“I added two copies of their image head-to-head so I could fold the piece and have a two-sided photo,” Caylor says. “I folded the image over donated paint sticks from Sherwin Williams and used adhesive to bond it all together. I gave them to the parents to cheer on their kids during the game. It was also a way for the banner images to travel to away games.  It was a big hit.”

Check out more of the project images in this gallery: