What They’re Saying: “HP Satin Wrapping Paper is a Unique Way for One Small Thing to Have Impact” | LexJet Blog
BEGIN TYPING YOUR SEARCH ABOVE AND PRESS RETURN TO SEARCH. PRESS ESC TO CANCEL
Skip to content 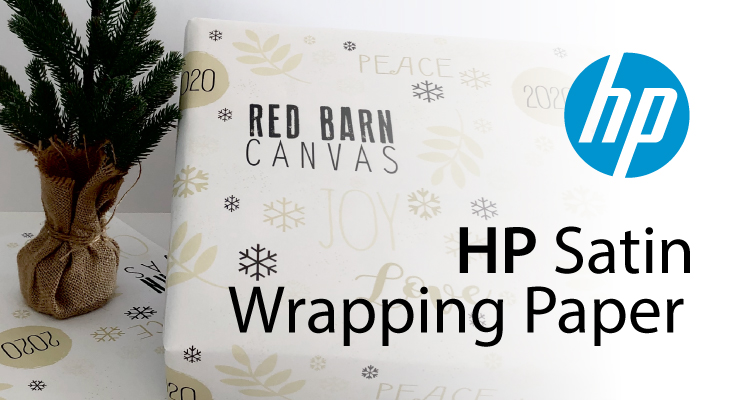 Andrew Hodge, who – along with his wife Kristy – owns Red Barn Canvas, has been running a successful home-based online business for the last nine years. “We started in Connecticut. We were also in Dallas, Ga., for about five years before we relocated to Lake Hartwell, Ga.,” says Hodge. “Because it’s an online model, we were able to move with the business and have no interruptions, which is great.”

Hodge says Kristy is the creative one and he’s the one that looks at his printer and wonders what other exciting things it can do. “I’m always wondering what I can print, other than canvas on the HP Latex 115,” he says. “I asked my LexJet sales representative to keep me updated on other products and one day, he suggested the HP Satin Wrapping Paper.” Realizing the potential, Hodge tried a roll. “I got a roll in, checked it out, ran some tests to see if we liked it, and to see if we could find a way to use it.” 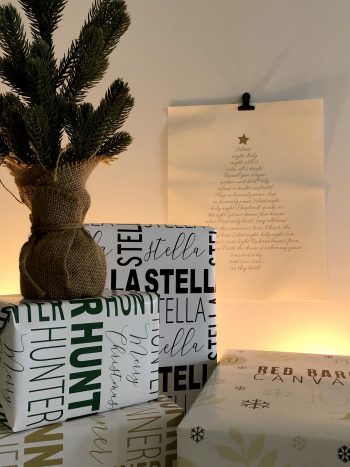 They added the customized wrapping paper to their repertoire about two years ago, right before the holiday season started. They feared they wouldn’t have enough time to get the new product set up online to have an impact on the 2018 holidays. So, they thought outside of the gift box, so to speak, and designed one-of-a-kind wrapping paper with the Red Barn Canvas logo and used it for packages and gifts for special clients.

However, it was when they designed a few sheets of customized wrapping paper for the daughter of a family friend that they realized what that little extra personalized detail can mean. “They sent us pictures of her opening the gifts, and the level of excitement of her seeing her name all over those boxes, it’s hard to replace,” says Hodge. “We knew then that it could be a fun, unique way for one small thing to have an impact.”

Hodge says in the two years since they started offering it, their wrapping paper business has grown exponentially. “Our first holiday, we probably sold about 20 sheets and now, it’s every other day. It’s not just Christmas holidays, it’s birthdays throughout the year, which is fun.”

About three months ago, after nine years as an online-only retailer, the move to Hartwell, coupled with the growth of the business, helped the Hodges open their first storefront location. Hodge feels that the ability to customize anything from canvas to banners to wrapping paper in-house is a big reason for the success. “Originally, we were only going to run canvas on the Latex 115, but once I started to see what I could do with it, it grew into offering other things and h 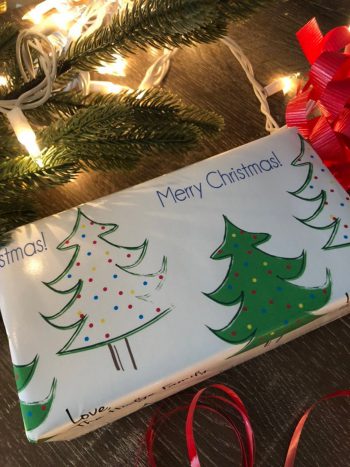 as helped the company grow.”

And other businesses in the Lake Hartwell area are starting to take notice. “About three weeks ago, we printed personalized wrapping paper for a local heating and air company,” says Hodge. “It was the biggest order of wrapping paper we’ve ever done. They are staging their storefront for the holidays and want to wrap gifts in paper with their logo.”

HP Satin Wrapping Paper is not just for wrapping gifts. As Hodge has discovered, it also works well as a satin poster paper. “We have a local web-based company that offers a map of the lake and they asked if we could print the poster. Since we just moved here, we want to network and help as many people as we can to help grow our business,” he says. “We partnered with them. They sell the maps on their website, and I print the posters on the wrapping paper and personalize them with their logo.”

Hodge says that Kristy will soon be staging the Red Barn storefront for the holidays and will use the wrapping paper on gifts to show clients this option. “Seeing it in action is more enticing than just looking at an image on the internet.”

Andrew and Kristy are excited about the positive impact the HP Satin Wrapping Paper has had on Red Barn Canvas. They originally thought it would be a fun way to try out new designs for the holidays and special occasions, but it morphed into something more. “I am always looking for new ways and opportunities to utilize the printer and this is one of them, and it has been a great addition to our offerings.”