The Art of the Exhibit: Using Fabrics to Bring a Legend to Life | LexJet Blog
BEGIN TYPING YOUR SEARCH ABOVE AND PRESS RETURN TO SEARCH. PRESS ESC TO CANCEL
Skip to content 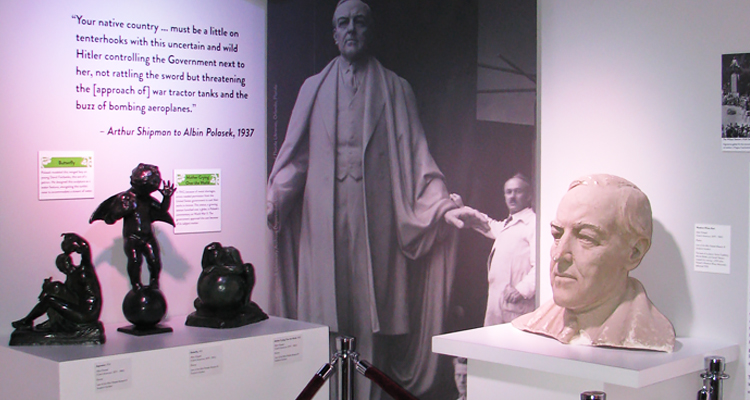 The exhibit was designed to highlight the life of Polasek, who had retired to Winter Park, Fla., in the 1950s, where he continued to create art and established the Polasek Foundation, which celebrates his life and work. The History Center exhibit is one of 21 throughout Orange County, Fla., recognizing a variety of artists and art leaders who have influenced the community over the past 50 years. In addition to sculptures and art tools and molds, Trembly received a variety of excellent, high-resolution photos for the exhibit. Because he had a lot of wall space to fill, Trembly decided to give HP Light Fabric a try for floor-to-ceiling prints as a “good change from hard, printed photos,” he says.

“For something like this, you want the highest resolution photos you can get,” Trembly says. “And with the fabric, the image quality is beautiful — just amazing. And even after being printed, the fabric is still extremely supple and has no stiffness to it, whatsoever.”

When experimenting with HP Light Fabric, Trembly said it took a little trial-and-error, but perfecting the results was worth it. “We ran some test prints to see how it behaved with the printer and to get used to working with it,” he says. “With some scrap, we experimented with cutting the edges using a hot knife, which we found to be the best solution with this material. We made some gloppy edges at first, but we learned how to use it. “If you’re using a new material, be willing to play with it, test it, sacrifice material,” he says. When printing to the fabric, he found that using a takeup reel was essential; “you have to keep the tension,” he says.

“Printing to fabrics is something we would have had to send out-of-house in the past, and this was a good chance to do it in-house,” Trembly says. “So far we like the fabric and can see us using more of it for future projects.”

The Art Legends of Orange County: Albin Polasek exhibit will remain on display at the Orange County Regional History Center through May 29, 2016.