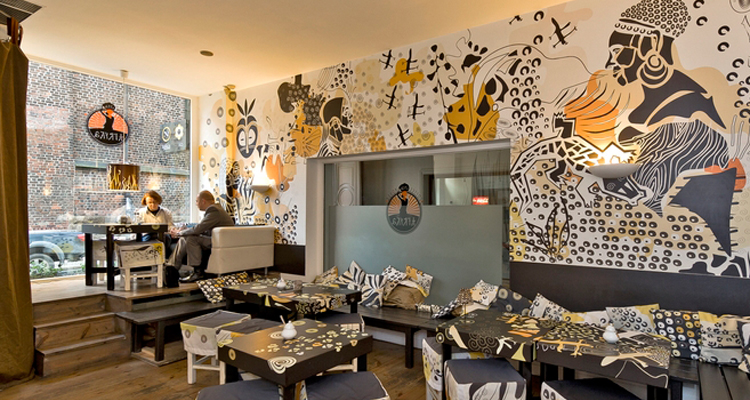 Today, we’re kicking off a blog series on how on-demand printers and anyone offering wide-format printing services can jump into an exciting new market within the industry: Décor printing.

Chances are you’ve heard about the booming customizable décor printing opportunities in our industry. With the advances in substrates and printer technology, offering your customers more ways to create one-of-a-kind projects for residential or commercial spaces has become more accessible than ever.

It’s also likely your customers are starting to make requests for projects like wall murals, canvas wraps, floor graphics, customized window screens and even lampshades. In other words, if you can print it, they can decorate with it!

END_OF_DOCUMENT_TOKEN_TO_BE_REPLACED Eric Erickson, prepress systems administrator for Clear Lake Press, Waseca, Minn., loves LexJet Print-N-Stick Fabric, and is sticking it everywhere to give customers and prospects a bigger-than-life visual of what they can do with the printable adhesive-back fabric.

The nostalgic photo above was applied at the offices of Clear Lake Press to illustrate the eye-catching displays that can be easily and economically created in similar settings. Erickson has also created visuals in various forms and formats for other environments, like cubicle and bedroom walls.

“We’re trying to provide some creative ways of using it, more than just rectangles on walls. You make up something, show it off, and it helps spark ideas for use in their home or business,” says Erickson.

Erickson adds that the unique adhesive, which makes it easy to re-position, remove and re-use is also a big selling point to customers.

“Now that we have offered Print-N-Stick and are showing it off, a lot of people have been asking about it. For instance, we printed some artwork for the Waseca United Way from the front of their brochure. We made a large graphic out of it with Print-N-Stick for use at local businesses to put on their walls and promote the United Way. When they’re done with the promotion, they can peel it off and put it back on the backing paper and hold onto it for future use,” says Erickson.

For the classic kids’ lemonade stand photo from 1967, Erickson asked the Waseca County Historical Society, a long-time customer, if he could use the photo for their wall. The Historical Society was happy to oblige (with the requisite “be careful with the photo” instructions) and Erickson scanned the original 6 1/2″ x 4 1/2″ black-and-white photo.

The photo was scanned with a desktop Epson scanner and brought into Photoshop for touch-up to get the right tone, and blown up to its final wall mural size of 12′ x 8′. The image was printed in two panels on the company’s Canon iPF8300 and applied horizontally with the help of employees Tonya Wittman and Cory Stencel.

“There’s a little bit of an overlap that you can see. This was our first time applying more than one panel and we learned from the experience. Next time, we’ll include an overlap and slice it right down the middle and take off the excess for a clean, exact cut,” says Erickson. “We love the material and the way the bright white point on the fabric reproduces artwork, whether it’s black-and-white or full color. The coordinator at the Historical Society was thrilled with the mural. The outside of Spectra Imaging’s building is covered in brick so Rogers wanted to continue that theme inside to give the space more character, instead of just boring painted walls. More importantly, it makes visiting customers and prospects stop and look, and to ask how Spectra Imaging did it.

“We’ve had a lot of people say that when they first glanced at it they thought it was real brick. Then, the more they looked at it they realized that it wasn’t brick at all and wanted to know more about it,” says Rogers. “We’ve sold a lot of wall murals to companies that see it and want it on their walls; not necessarily brick, but once they know we can print any image on the material, then that’s what they want.” And sometimes they do want brick, like the customer who requested a brick wall mural for their bathroom décor (pictured here).

“It’s great for companies to dress up their offices because they can use any image. And, if a year later they want to take it down, they can remove it without leaving any residue behind or damaging any of the drywall,” adds Rogers.

Ultimately, the interior décor at Spectra Imaging is a powerful sales tool. And what makes it that much more powerful in this case is the print of a seemingly infinite hallway in and amongst the “brick” on the back door of the showroom.

Rogers could have wrapped the door, but chose instead to print the image directly to a big piece of foam board with a flatbed UV-curable printer. Once the door handle and deadbolt were removed, the printed foam board was stuck to the door with double-sided tape.

“When we created the file we factored in the door and basically cut it out in the file. Then, we printed the top and bottom panels for the left and right side of the doors and a third smaller panel to apply above the door,” explains Rogers. “To make it as seamless as possible we apply it horizontally. A lot of people apply theirs in vertical panels, but even though it’s a little more difficult to apply it horizontally, I don’t like doing it that way because you create more seams. With this project there was only one seam on each wall in the middle of the wall. We also take our time and use two people for the installation. One person holds the roll and starts applying while the other pulls the release liner.” As noted in an earlier post here at the LexJet Blog, if you’re headed to the SGIA Expo in Orlando next week (Oct. 23-25) stop by the LexJet/Fredrix Print Canvas booth (1033) to see the latest products for canvas production and to pick up some great show specials.

Another related event that you should look into while you’re at SGIA is HP’s Digital Wall Décor Event on Wednesday, Oct. 23 from 5:30-7 p.m. at the Rosen Plaza Hotel (near the Orlando Convention Center), Salon 11 and 12. The event is geared toward anyone who wants to increase sales in the growing and dynamic wall décor business.

There’s a lot of opportunity out there in wall décor, and the event will cover the following topics:

Space is limited, so click here to register for this event today. If you have any questions about this event or LexJet show specials, contact a LexJet customer specialist at 800-453-9538.