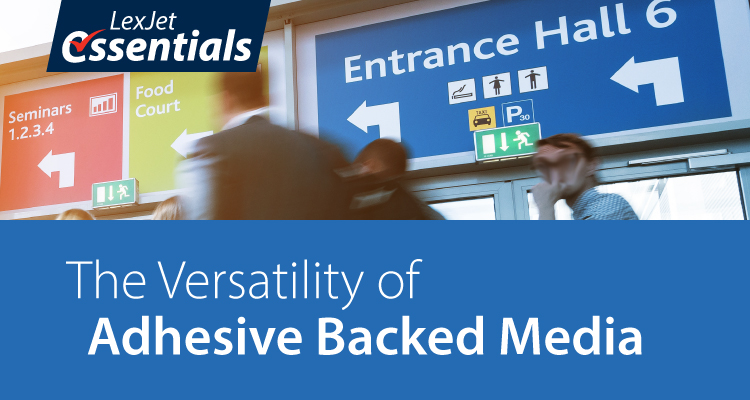 When searching for print media for trade shows, job fairs, or events that is dependable, easy to use, and affordable, there are several products that will meet your customers’ needs.

For those with aqueous printers, LexJet PolyGloss PSA is a popular solution for long-term indoor and short-term outdoor signage. This product creates glossy and bright images for your customers to showcase their brand at any event.

The instant-dry coating of the LexJet PolyGloss PSA meets the demands of print shops that offer high-volume graphics on multiple models of aqueous printers.

Another solution for aqueous printers to help your customers stand out during the highly competitive trade show and event season is the LexJet TOUGHcoat™ Water-Resistant Self-Adhesive Polypropylene. This thick 6.5-Mil, adhesive-backed film produces vivid graphics and can last up to 8 months without lamination. With its TOUGHcoat™ technology, the film is abrasion- and water-resistant.

Stock up now and prepare for the upcoming trade show and event season with these LexJet Essentials. To learn more about our adhesive-backed media, please contact a LexJet Customer Specialist at 800-4-LEXJET. Once you start, you can’t stop. That’s been the experience for the Orlando Science Center with custom-printed wall murals for its permanent and traveling exhibits. “The wall murals help in a lot of ways. First, it’s a big location identifier for us. We have an unusual building with a central rotunda that has a spiral staircase with a lot of glass and light. We had been using wall signs outside the halls that were 6′ x 3′ vinyl banners that we would change out, which was better than the small signs we originally used by the doors. Once we started doing these full-size murals by the hall entrances for the exhibits – and with them being such a focal point and life-sized – there was no going back,” explains Eric Vickers, Creative Manager for the Orlando Science Center. “It gives us a lot more atmosphere than just the blank walls, and it’s great for sponsorships, especially with traveling exhibits. We’re getting local exhibit sponsors again, and this provides much more visibility for them, so they are not only in our related collateral materials, but also in front of the exhibit space itself nice and big on the wall. So that’s been a great selling point.” Vickers adds that most of the photographic and illustrative elements they use for the murals can print life-size so visitors interact with the murals and take photos of themselves with the characters depicted in the murals, such as the murals for the recent Curious George: Let’s Get Curious exhibit.

“With Curious George we printed out a couple of life-size Curious Georges that go up about seven feet on the columns inside the exhibit so there are additional thematic elements to brighten up the hall,” says Vickers. That first Star Wars wall mural was printed on LexJet PolyGloss PSA with a Canon iPF9100 inkjet printer. Since then, most of the murals have been printed on LexJet Print-N-Stick Fabric, though PolyGloss PSA is still used for murals that require a glossy finish and opacity, such as an upcoming interactive exhibit experience about Mars called Space Base.

“The Space Base exhibit murals are printed on the PolyGloss because we needed it to be completely opaque; there are seams and a darker-color paint on the wall behind the mural. We also wanted a gloss finish so that it looked more like a window looking out onto the surface of Mars, and to have a clean, space station feel,” says Vickers.

The murals pictured here for the Curious George: Let’s Get Curious and the Engineer It! exhibits were printed on Print-N-Stick Fabric where the background colors on the walls were lighter.

“Print-N-Stick is our new favorite thing. It’s a material that holds up well on its own, and helps us provide more color and atmosphere to our walls,” says Vickers. “The fabric has been great because it comes off very easily, but stays put well. It’s a lighter material so it doesn’t have as much weight pulling it off. It also tends to let the air out better and goes down flatter when it’s applied. It really hugs the wall and conforms to it well. We’ve had other adhesive-back materials start to peel down from the top because of their own weight on jobs this size, but we haven’t seen that at all with Print-N-Stick.”

Vickers also uses Print-N-Stick for the main traveling exhibit hall since it changes every four months or so. And, when it’s time to put up a new mural, the old one comes down easily, doesn’t damage the wall or leave any residue behind.