all american wallpapering | LexJet Blog
BEGIN TYPING YOUR SEARCH ABOVE AND PRESS RETURN TO SEARCH. PRESS ESC TO CANCEL
Skip to content 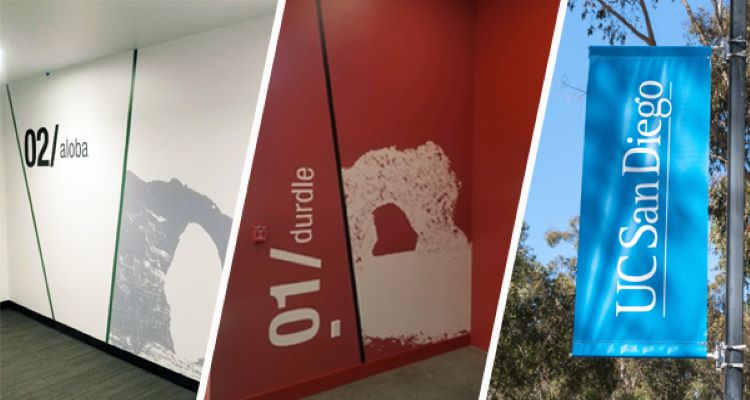 Earlier this year, the design team at Century Sign Builders in Albuquerque, N.M., partnered with All American Wallpapering to decorate the final phase of a three-phase project that started in 2017. Nuevo East – the Graduate Student housing at the University of California San Diego – was to be redecorated and ready to go in March; however, Damien DeMenno, Project Manager for Century Sign Builders, says that COVID-19 altered their plans. “We completed it in March, but we had to finish quickly because the buildings had to be turned over to the State of California to be used as quarantine pods.”

After researching different products and finishes, DeMenno and the Century Signs team chose Type II compliant Vescom Polster for the wall décor for the UCSD grand finale. “We narrowed it down to a couple of different finishes and ultimately selected Polster for this project,” he says. For phase one of the project, DeMenno used Korographics Glassed Out and they originally looked at using Vescom Matte for phase three because the texture was a close match to the first project. 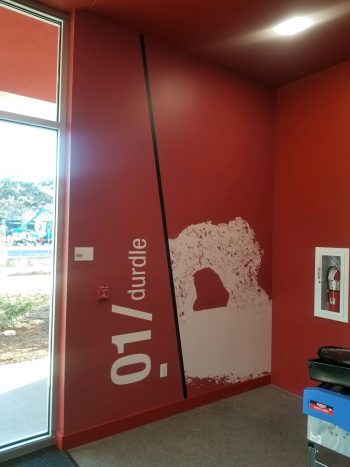 “When you’re dealing with putting a ‘matte’ product on a super smooth surface, you still get a little reflection off of it,” DeMenno says. “What’s cool about the Polster product is that it has a super light stucco texture to knock down any glare and it just made the whole project seem much more high-end.”

Giving his clients a high-end look is important, but working with a product that is easy to print and install also factors into his product selection. “We previously used a lot of laminated vinyl graphics, but the industry trend seems to have shifted to wallpaper. Since we have an HP Latex 365, we started working with Vescom and have for several jobs, now.”

For large projects like UCSD, he sees the consistency of Vescom as a huge benefit. As a precaution, DeMenno normally adds an overage allowance to job estimates to account for material errors, printer errors, or anything that may happen during fabrication. However, with this project, there was no need to use the extra material. “This material printed beautifully, and the color was consistent. We didn’t have any issues and we ended up using exactly what we specified and didn’t need any extra. This material really is incredible.” 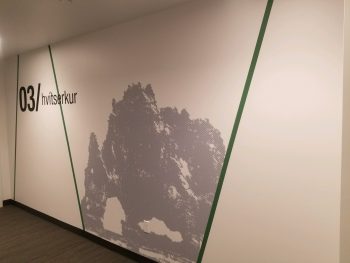 Prior to working with Vescom, he’d experienced installation or color issues with other products but did not run into any delays while working with Polster. “In the past, I’ve noticed other brands will stretch or be 1/8” off at the top or bottom or sometimes the colors won’t match up and you’ll have to reprint a panel,” he says. “We had none of those issues with this product.”

DeMenno says it was important to have a product that would allow them to cover 34 walls, each with a unique graphic, in a very short timeframe. “With other products, we had the primer and the glue, and all the tools of traditional wallpaper,” he says. “When we started working with Vescom, we realized we didn’t need any of that. While we did still prime the walls, we were able to roll the glue right on to the wall rather than use a pasting machine. This job required fewer tools than the traditional wallpaper process, and that time-savings makes us competitive.”

After working with Vescom for several projects now, DeMenno says he would recommend it to future clients or anybody doing wall décor. “Everyone should get the samples and practice with them, that’s how you get the best results,” he says. “We did test prints on several different things to make sure we were happy with our choice. The effort is far worth it.”

With minimal waste – of both product and time – and easy installation, DeMenno and his clients were happy with the final outcome. “It’s an incredibly affordable product and to get results like that, everyone was just thrilled.”

If you are interested in Polster or any other Vescom textures, visit us online or call a LexJet representative at 800-453-9538.