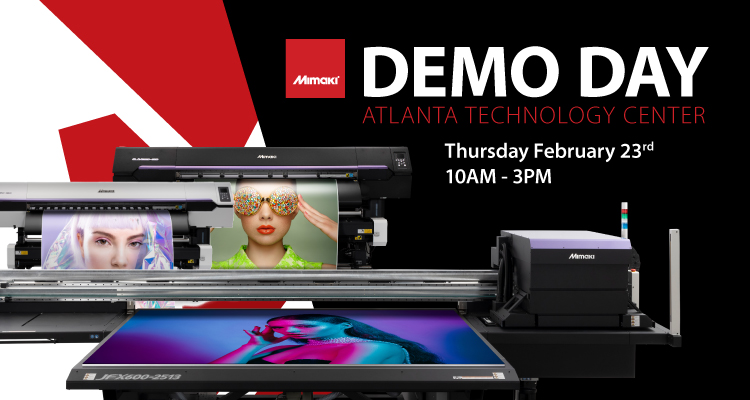 Are you in the Atlanta, Georgia area and looking to learn more about the latest and greatest in printing technology? Look no further! We are excited to invite you to a demonstration day event for Mimaki printers.

This event will provide an opportunity for you to see the printers in action and learn about their features and capabilities. Our team of experts will be on hand to answer any questions you may have and provide demonstrations of the newest UV-LED, dye sublimation, eco-solvent, and 3D printing technology.

At this event, you will have the chance to see the latest Mimaki printers in action, and learn more about their capabilities, including their high-quality print output, speed, and ease of use. You will also have the opportunity to speak with our team of experts and ask any questions you may have about these printers and how they can benefit your business.

This event is valuable for anyone in the Atlanta area who is interested in learning more about Mimaki printers and their potential for your business. With the latest technology and features, these printers can help you streamline your operations and increase your productivity.

The demo day will be held on February 23rd from 10AM to 3PM at the Mimaki Atlanta Technology Center in Sewanee, Georgia. Please RSVP below by February 23 to confirm your attendance. We look forward to seeing you there!

Don’t miss this opportunity to see the latest technology in the printing industry and learn how it can benefit your business. We hope to see you at our demo day event. SGIA has released its 2014 schedule of free Webinars, which SGIA says presents unique information and fosters important discussion about industry topics in 60 minutes or less.

The 2014 Webinar series starts with the session Finding Savings Before & After the Print on Jan. 15 at 2 p.m. ET. SGIA’s Dan Marx will moderate a discussion panel between industry experts on the topic of how companies can differentiate themselves and carve out a competitive advantage by looking to become leaner and seeking new profit opportunities.

Here’s the SGIA Webinar schedule in 2014…

All Webinars are subject to change and free unless otherwise noted. Webinars are 60 minutes long, beginning at 2 p.m. ET and broadcast online. A complete schedule can be found at SGIA.org.