Reflecting on her back-to-back wins, Smith says she’s very excited that her work speaks to the judges. “Impact is so important. I put a lot of emotion behind the story in my images and the judges can tell,” she says. “It’s not just another pretty picture. When they see the title [of the image], I want them to brace for impact, I want them to feel something, and apparently, they did.”

The inspiration for “Leaving with Dignity” struck when Smith saw a black and white image of an older woman with a disheveled crown.  She initially envisioned a queen leaving her throne for the last time. However, as she started working in postproduction, Smith says, “I noticed she had a peaceful look on her face, and I added a cloudy feel with rays of light. I felt like she was making her way into Heaven, with God saying, ‘well done, my good and faithful servant.’  I felt like she was leaving this world with dignity rather than leaving the throne. I chose to name “Leaving with Dignity” so people could form their own story.”

During the time between her “innocent” 2017 and her “dignified” 2018 PPA SW wins, Smith decided to step out of her comfort zone and teach an intermediate/advanced level course at the Texas School, which maxed out at 30 students – a rare feat for a first-time teacher. “I wanted to show the students how I create an image from start to finish,” she says.

For Smith, it isn’t just capturing an image that’s important, it’s telling the story. To pass along the techniques and methods to future generations is exciting. “One of my favorite projects for the class was when I printed about 30 copies of one of my photos to teach the students some of the ways I finish a print: enhancing the image with colored pencils, hand tearing the edges, matting, etc.”

Smith chose LexJet Sunset Bright Velvet Rag to use as a teaching tool because “I love the way it tears and the way it feels. It prints really nice.” 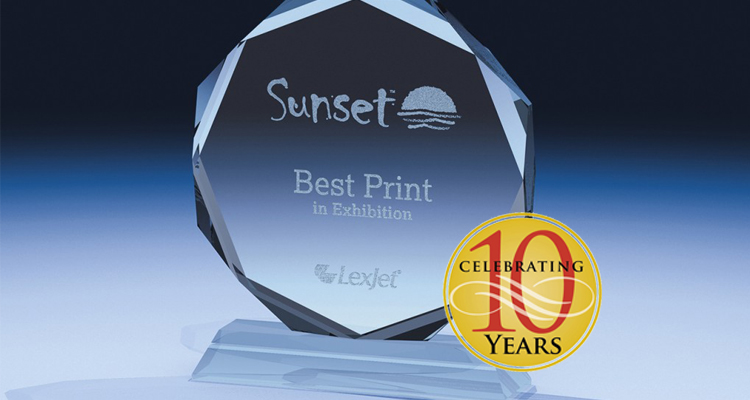 For the last decade, the Sunset Print Awards have been bestowed upon more than 110 photographers, all of whom received cash prizes and the coveted crystal trophy. For the 2018 competition, we’ve decided to give more photographers the opportunity to vie for the top spot. The five Professional Photographers of America districts will offer a Sunset Print Award in eight categories, in which winners will need to showcase the fundamental “elements of excellence.”

There are several opportunities over the next few weeks to earn awards at the following events:

To see a full list of scheduled events throughout the year, check out the up-coming awards schedule on the Sunset website.

The regional 2018 Sunset Print Awards will be available to colleges, camera clubs, etc., as well as professional organizations, like PPA and WPPI. All the regional winners will be in contention for one of the top three spots in the National Sunset Print Competition held at PPA – International Photographic Competition (IPC).