SGIA Expo Recap: Hotlanta Lives Up to Its Name | LexJet Blog
BEGIN TYPING YOUR SEARCH ABOVE AND PRESS RETURN TO SEARCH. PRESS ESC TO CANCEL
Skip to content 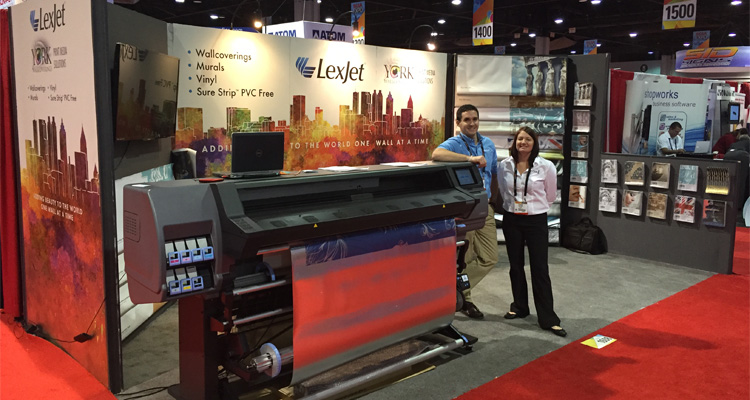 Four representatives from LexJet joined the nearly 24,000 people in attendance at the 2015 SGIA Expo at the Georgia World Congress Center in Atlanta for an energetic showing from a wide variety of experts across our industry.

Within a few steps on the tradeshow floor, it was clear to see that the biggest buzz was all about textiles and printable fabrics, which were displayed in stands and frames and hung from the ceiling at every turn. In fact, according to Mark Shaneyfelt of Aurora Specialty Textiles, 75 percent of the textile growth is forecasted to be in the soft signage category, meaning POP displays, banners, framed graphics and tradeshow booths. One of the most impressive textile-based displays was the 18-foot prints in the HEYtex booth, featuring some of the company’s employees on giant backlit displays.

“When you walk around the show, you see many more textiles than you’ve seen in previous years. Besides our existing PVC business, textiles are really popular, whether it’s for dye-sublimation, latex or UV,” says Michael Kirk, sales director in HEYtex’s Germany headquarters. “Some use it because they think it is more environmentally friendly, and because textiles are much lighter and easier to install. You can print it, fold it and ship it to any shop and they can install it themselves.”

HEYtex has recently partnered with LexJet to bring a new batch of vinyl banner options to our offerings, and, according to our product specialist Jessica Blevins, pictured above with Kirk in the HEYtex booth, fabric is a trend you can expect to see with LexJet in the near future. “That’s exactly where we’re going next,” Blevins says. “With fabrics, there’s a higher-end appeal as an alternative to using a substrate or a vinyl, and it’s very versatile.”

Hot topics for printer technology included dye sublimation, HP Latex and PageWide and solvent. In fact, we got a sneak peek at the next round of Epson’s S-series solvent printers that will debut this January. Stay tuned to our blog to learn more about these faster, more productive printers.

LexJet manned two booths: The first one featured HP latex printing and the LexJet WallPro by York wallcoverings in a variety of styles, highlighting the silver and gold mylar options. “Printing on the silver and gold mylar wallcoverings drew in a lot of attendees who were fascinated that they could use their latex or UV printers to print on this specialty material,” says Vince Bejar, LexJet’s business development manager. “Just having the mylar film hanging from the HP Latex printer was enough to have people stop in their tracks to touch and feel the materials.” In its second booth, LexJet paired with Fredrix to answer questions about aqueous and solvent compatible canvases. We were happy to learn that Martin Lawrence Galleries won a bronze award in the Golden Image Award Competition for artist Liudmila Kondakova’s “Four Seasons,” printed on Fredrix Crystal Matte Canvas, which is available exclusively through LexJet.

“The Fredrix and York booths had a constant flow of people, and our product specialist team was building relationships and trying to find the ‘next best thing’ that LexJet can bring to the market,” says Jason Metnick, a member of the leadership team for LexJet and its parent company, S-One Holdings Corporation.

If you’re shopping for an HP Latex 310, you can also take an additional $1,000 instant rebate when purchased with a Take-Up Reel on the same invoice.