Prints That Win: Coming Home for the Holidays | LexJet Blog
BEGIN TYPING YOUR SEARCH ABOVE AND PRESS RETURN TO SEARCH. PRESS ESC TO CANCEL
Skip to content 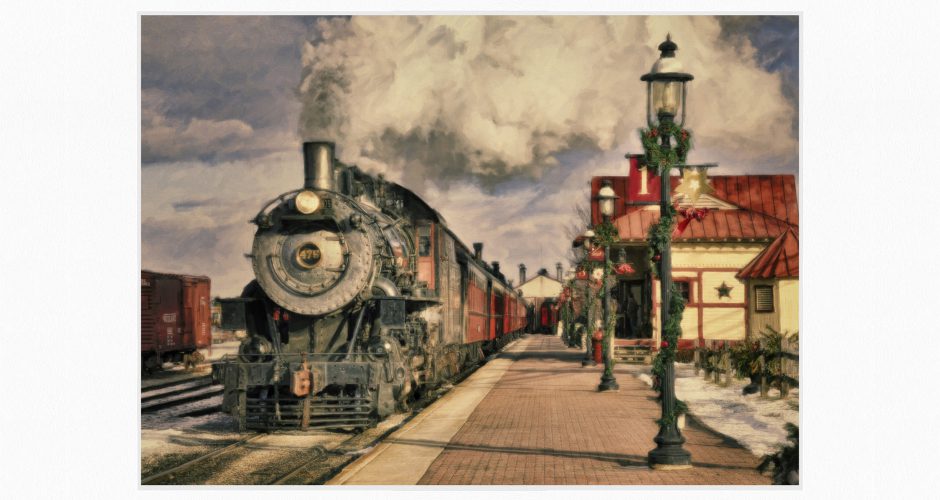 Howard carried that early lesson with him throughout his career, once demonstrating at a PPA National Convention that a $25 Polaroid camera and a $10 pack of film is all you need to create the perfect portrait. “If you know what you’re doing, you don’t need reflectors or a flash, all you need is natural light and an instant camera,” he says. “I still have a number of albums with hundreds of Polaroid images showing what I did back then, when perfection on the first shot was imperative.”

As a child, his summers were spent attending art classes – most of which were photography – at the local library. Those classes fed Howard’s desire to take pictures. “From about the age of 7 to junior high school, I did photography for fun,” he says. “Then, at 15, I started working at the local newspaper doing sports photography.”

Once he got into high school, he not only had the continued support of his parents, he also gained a mentor in high school yearbook advisor Edward Barry. “I was a freshman and to be on the yearbook staff, you had to be a junior or senior, but Mr. Barry was familiar with my work from the newspaper,” he says. “In fact, he believed in me so much, he handed me his personal credit card to buy $700 worth of professional equipment. I would pay him back by contributing high-quality work to the yearbook over the next three years.”

During his stint on the yearbook staff, Howard met prominent Lebanon photographer Bill Uhler, who would become a mentor and friend to the young, but well-established photographer. In 1983, two years after graduating from high school, he joined Professional Photographers of PA and PPA, which gave him exposure to a wide variety of local and national professionals. “I spent time with a number of prominent photographers like Don ‘Big Daddy’ Blair, Dean Collins and others. They all influenced my style one way or another,” he says.

Drawing on his years of experience and training, Howard entered his first PPA competition in 1986. However, he chose a path that he doesn’t necessarily recommend for future first-timers out there. “When we take photos, we tend to fall in love with them and think they are the best things ever created, so when I entered the competition for the first time, I just sent them off to the PPA. I never consulted with anyone, I just knew I was going to be the youngest photographer to get a clean sweep from the judges.” It didn’t quite work out the way Howard envisioned. “Not one of my four images was accepted. My highest score was 69,” he says. “Right then, I learned two important lessons: 1) always get a second opinion and 2) never take it personally.”

Scoring well is important for PPA competitions, but as important as the hard-earned merits are, it is also critical to learn something. For Howard, the rough showing gave him an opportunity to re-evaluate his presentation and capture techniques, which paid off in competition the following year. His scores ranged from 80-85 for his four entries. In the decades since, he feels competitions have made him a solid and well-rounded photographer, but more importantly, he knows that the medals, ribbons and trophies help with the perception a client has of a photographer’s work in such a highly competitive field.

It’s one of those trophies and award-winning prints that is currently showcased in his studio window: his 2018 Sunset Print Award winner, “Coming Home for the Holidays.” “The front window is decorated for the holidays and I thought everyone might enjoy seeing it right now,” Howard says of displaying his image and Sunset trophy.

Howard’s original plan for the image was to use it for last year’s Christmas card. He reimagined it as a Kincaid painting, then printed it using LexJet Sunset Fibre Rag 335g and entered it in the Professional Photographers’ Association of Pennsylvania competition, taking the top spot in the Illustrative category.

Trains are a favorite subject for Howard’s work, and he’s had the honor of having several images featured in the Railroad Museum of Pennsylvania, which is located at the Strasbourg Railroad in Lancaster County, Pa. It is home to one of the largest collections of steam locomotives in the country, including five of which are still in operation.

One snowy day, Howard set up at the Strasbourg loading platform, snapping pictures as the trains rolled in and out throughout the day. “At any given time, there were thousands of people on that platform, and yet there’s no one in the picture.” Howard knew it was about time for the arrival of the last train of the day. As the train approached the station, steam billowing out of the chimney and not a single person waiting on the platform, Howard was ready. “I took that picture right as it pulled in. About 90 seconds later, the platform was full of people.”

When it came time for the competition, Howard says he wasn’t sure what to title the image. He decided to call it “Coming Home for the Holidays” and it hit “home” with the judges. “I had one judge tell me that he got a warm fuzzy feeling looking at the picture,” he says. “He could picture his own family about ready to disembark at the station. Without people, everyone can create their own personal story. Every time I look at this image, I feel like there should be Christmas music playing to welcome everyone home.”