Prints That Win: A Sketch of Innocence | LexJet Blog
BEGIN TYPING YOUR SEARCH ABOVE AND PRESS RETURN TO SEARCH. PRESS ESC TO CANCEL
Skip to content 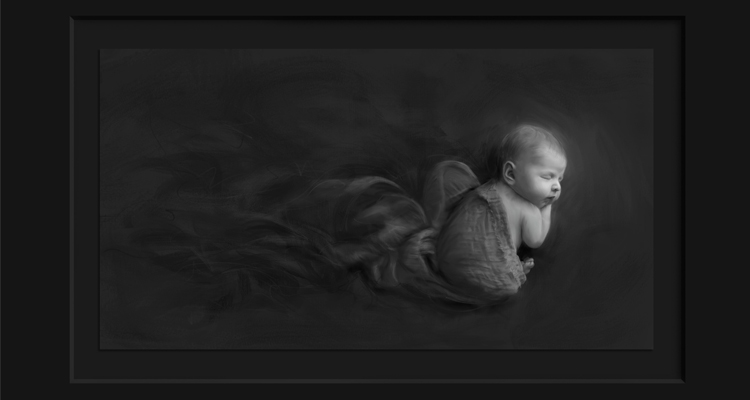 But with one of her latest competition prints, Kelleher took a familiar subject matter and turned it into a dramatic, winning art piece. “A Sketch of Innocence,” pictured above, won the Sunset Print Award at the 2015 Professional Photographers Association Western District print competition.

“The background is dark, mysterious and dramatic,” she says. “But it’s juxtaposed with the title and subject matter to provide that innocence. It was very striking. One of the judges punched it at a 100 score right out of the gate.”

To add to the drama and artistic flare of the piece, Kelleher says she wanted the image to read from left to right as a sketch of the blankets flowing into the photo of the baby. “I always wanted to do a charcoal drawing of some kind,” she says, and created the sketch look in CorelDRAW. “The birth of a child is such a process, but when they’re born, they’re complete. I wanted it to be subliminal … the left is very sketchy and the right is very complete.”

While Kelleher explains that she gives her all to her clients, when it comes to print competitions, this former broadcast journalist takes it even further. “Competition is about taking the entire soul of your being and putting it into your work,” she says. “It’s so all-encompassing. All of my work has me in it, but an image for competition is my soul bared.”

Once the print was complete, Kelleher printed it onto LexJet Sunset Velvet Rag 315g to give it a true etched-paper look, and then she created a 3D frame that added another element of drama to final piece. “If it had been judged digitally, it would not nearly have done as well as it did as a print.”

Kelleher says participating in print competitions for the last six years has trained her to better identify and fix the problems in an image. “Competition teaches you to see,” she says. “So many photographers have not honed that ability to see problems in an image — either before they take the picture or after. When you have ability to see, it takes your creative skills to the next level, and it makes you more fine-tuned.”