Photo Class Asks: How Might We See the Beauty in All People? | LexJet Blog
BEGIN TYPING YOUR SEARCH ABOVE AND PRESS RETURN TO SEARCH. PRESS ESC TO CANCEL
Skip to content 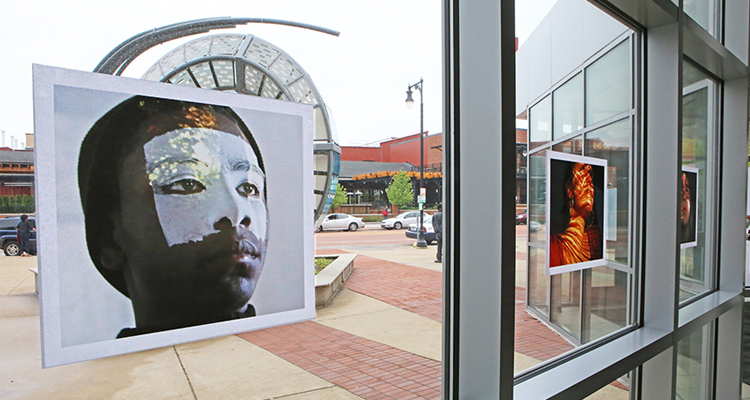 Each year, Dennis Grantz challenges his photography students to finish a question: “How might we …?” His most recent class decided to take on the issue of diversity, and asked: How might we help our peers see the beauty in all people?

Throughout the year-long class, the West Michigan Center for Arts & Technology students had a variety of discussions on the topic, ventured out into the street to conduct interviews, and gathered stories about how people faced discrimination in their lives. “Out of that, a lot of cool stuff came together,” Grantz says.

From there, the students, who ranged from 9th to 12th grade, took portraits and worked in Photoshop to create composite images of various faces puzzled together with different ethnicity, age and gender. A senior, Mercedez Ramos, created a stunning image by lining up the eyes of three different subjects (see image at right). “It startled me,” Grantz says. “The parts create a whole that’s even more beautiful than the individuals. It really surprised me that if you match up the eyes, the brain of the viewer doesn’t mind that the rest doesn’t match. It’s kind of become the iconic image of the project … the one people really respond to.”

Once the images were complete, Grantz and his students printed them on the school’s Canon imagePROGRAF 6400 using LexJet Print-N-Stick Fabric. The printed images were installed at the Grand Rapids’ bus rapid transit station, The Rapid.

“We were looking for a way to connect these images with the community at large,” Gantz says. “They didn’t have walls that would work well, but there were lots of windows to see from inside and outside.” After speaking to his LexJet representative, he settled on the Print-N-Stick, which he perfected with a squeegee when applying them to the glass.

Grantz says his program has grown over the years, along with the school, which offers training in a wide variety of mediums, including clay, screen printing, audio and video production, comic illustration, street art, video game design and more. “I’ve never worked anywhere quite like this,” he says. “It’s an educator’s dream job.”