Rhode Island artist Karin Giusti – a Professor Emerita of Art at Brooklyn College – enjoys creating pieces that are close to her heart, but also speak to anyone who sees them. Several years ago, she created a piece honoring the firemen who lost their lives as a result of 9/11. It was an all too personal piece, as her fiancé was one of those who died as a result of health problems developed from that dreadful day.

It was that piece, Three Seasons at Black Forest Farms, that helped her land a coveted spot commissioned by the Providence Art in City Life Commission for PVDFest 2020, public art installations in downtown Providence, R.I. The members of Providence ACT (Arts, Culture + Tourism) were familiar with Giusti, but that doesn’t mean they were just going to give her the opportunity, she had to earn it. “They saw my pillar piece, so they knew my work, but it still was a competition,” she says. They looked at the presentations and selected me as one of the three finalists. We then had a run-off against each other.”

Giusti was awarded the Civic Center garage, a 3-story parking deck with a unique grid pattern that she could incorporate into her design. “I looked at the building, but things got very serious in January,” she says. “I measured and photographed it and I didn’t know if my idea would work, but I had to give it a try.” 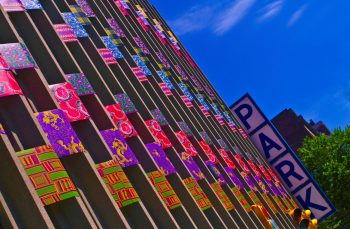 She wanted to treat the grid pattern on the exterior of the building as a loom and weave brightly colored ribbons of LexJet 8 Mil Absolute Backlit – the same material she used to create her 9/11 exhibit – to create a fabric appearance.

There was a lot to consider about using the backlit material, so Giusti reached out to LexJet’s Dean Lambert and Ramiro Torrez. “I didn’t know how the material would hold up, but I wanted to use it because it’s so beautiful,” she says. “I know the team at LexJet couldn’t make promises for such an unusual application, but I’ve worked with the material before and I know it’s really strong.”

Another difference between this project and the backlit columns is interior vs. exterior application. Her 9/11 exhibit was inside and not exposed to Rhode Island weather or a downtown environment. Torrez suggested the Performance Matte UV Vinyl Laminate to protect the artwork. “I’d never put this combination of materials outside for six months, so I really didn’t have an idea as to how it would stand up,” Giusti says. “But it’s been amazing! No fading, no damage, no tearing. This stuff has been indestructible out there, and it looks just as good now as when I put it up earlier this year.”

Giusti was excited to have her work displayed on the building since the colors would provide a bright contrast to the building, but also because it was supposed to be backlit at night. Unfortunately, 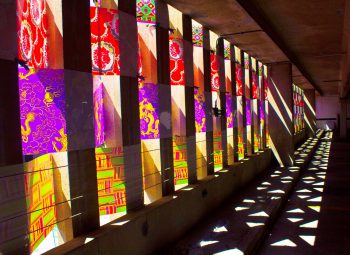 the city went into lockdown, so the exhibit didn’t get the lighting it deserved. Although the extraordinary conditions of the pandemic are limiting her audience, she is thrilled with the results of Dreamweave for a Third Space. Originally scheduled to be on display through November, Giusti learned that her exhibit has been extended into 2021.

“Nobody was going out or going downtown. Normally, I would’ve been hosting parties on site all summer long and doing PR, but it’s just been insane,” she says. “The colors are beautiful, and as an artist, not every sculpture you create will be that pretty or photogenic, and this one is. It’s a shame more people aren’t going to be able to see it.”

The different patterns were representative of countries around the world. “Even though the patterns are from varying countries, they are related. Some countries have copied other countries, some have occupied other countries, bringing their ideas to those countries. Of course, they don’t stop at borders, these patterns have a life of their own,” she says. “It’s all so interconnected, Third Space. it’s an urban theory about people learning to work together, not in ‘your’ space or ‘my’ space, but in a third space.”

While Dreamweave may not have been viewed by as many people as she would’ve liked, that’s not going to stop Giusti from coming up 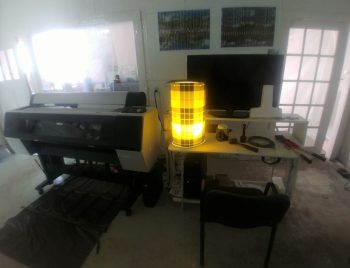 with her next great piece using Absolute Backlit. “I want to play and see if I can make this stuff permanent. Maybe sandwich it in plexiglass. I really want to push the limits of it and see what it can do,” she says. “Playing with this material has been phenomenal, and I can see doing more projects like this. I want to do this kind of project at festivals all over Europe.”

Even though there is so much going on during the creation of this piece, Giusti says she really enjoyed working on it and was glad to have something to do while in quarantine. “I spent the whole lockdown producing the piece here in my studio. Ramiro got the materials to me and it went smoothly,” she says. “He also helped me with the laminate material, but it was an absolute blast! It was so much fun because the backlit and the laminate were manageable and easy to work with.”

Giusti is grateful to so many people who helped Dreamweave become reality including FirstWorks, the City of Providence Department of Art, Culture + Tourism, and Bliss Properties, owners and operators of the Civic Center Garage, as well as her friends here at LexJet.

Through COVID, through quarantine, through cities being on lockdown, Karin Giusti drew upon the positive Third Space energy and had a great experience working on Dreamweave, “I had the time of my life on this project.” Hopefully, when people finally do see her work, they will have the same positive experience.