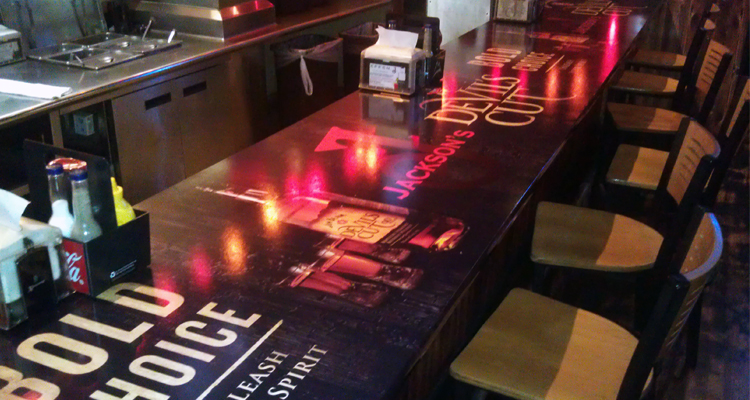 Now, Birch constructs his custom designs with LexJet Print-N-Stick Fabric and LexJet Crystal Low Tack. The details of his process is, of course, a trade secret, however, he gave an overview of the steps.

“I start by printing the graphic in reverse, wetting the wood and laying the transfer down so it’s not the sticky side. I rub it with a sponge, and all of the ink liquefies from the water, and it transfers onto the surface so it looks like the print,” he explained. He finishes each item with a protective coating.

With his original creations, Birch is in high demand. Although he is based in New Mexico, he ships his creations all over the world, and he has been hired by multiple Major League Baseball Teams to spruce up their locker rooms, and the VIP areas of the stadiums. “I had the privilege of working for the Colorado Rockies baseball team, and being my favorite team made it more special,” he says. “I also did the owner of the Rockies man cave and outdoor living area, and I did a lot of work for the players’ homes.”

Birch’s success has allowed him to expand his business. He creates banners, signs, custom floors, wall treatments, and he has even started his own baseball bat company, JL bats. To create these items, Birch uses products such as LexJet TOUGHcoat Thrifty Banner, LexJet TOUGHcoat Aqua Vinyl PSA, and Sunset Reserve Matte Canvas. He mainly prints on wood, but he has also experimented with other surfaces such as brick, concrete and acrylic.

Next up, Birch is working on designing the interiors of a chain of 10 doughnut shops this year, called Spudnut Donuts.

Stephanie began interning at LexJet when she was a sophomore in high school at Pine View School in Sarasota, Fla. Today, when she isn't going to school or writing for local magazines and blogs, she assists the marketing department with internal and external communications. She’ll be attending the University of Richmond in Virginia in the fall of 2015 to pursue a degree in journalism.