History in the Printing: One School’s Dedication to Fostering Creativity | LexJet Blog
BEGIN TYPING YOUR SEARCH ABOVE AND PRESS RETURN TO SEARCH. PRESS ESC TO CANCEL
Skip to content 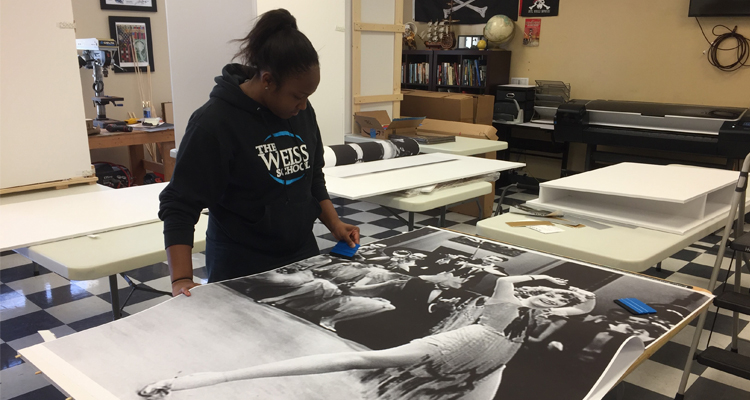 Each year, more than half a million middle and high school students participate in the National History Day competition. At the Weiss School in Palm Beach, Fla., this means months of research and preparation for the students, guided by their mentor and social studies instructor, Steven Hammerman. The students get to pick a historical topic relevant to the NHD theme of the year, and create a research project to present to judges. The project allows for a wide range of educational and artistic freedom, given the students get to design their projects as trifold exhibit boards, performances, papers, documentaries or websites. “Whatever the format is, the students get an understanding that it’s not just what you know, but how you present it, that matters,” says Hammerman. This year, Weiss has invested in a new tool to aid the students’ creativity: a DesignJet Z5400 Postscript Printer.

While this may not be the typical classroom accessory, this printer is an integral part of Hammerman’s history class at Weiss. It all started when Hammerman took a group of students on a trip to Springfield, Ill., to see the Abraham Lincoln Presidential Library and Museum. “We got a private tour of the workshop where there was an HP printer model,” says Hammerman, “and myself and my art teacher looked at this and realized we could do this in-house.”

Recognizing the possibility for educational integration, Hammerman got in touch with LexJet and purchased a printer for the school, along with LexJet Print-N-Stick Fabric. Despite only having it for a few weeks, Hammerman says that they’ve already used it extensively in the classroom, as well as for campaigns, advertisements, posters and more.  However, their main use for the printers revolves around the NHD competition.

The printer allows for unlimited ingenuity in the creation of the student projects, and is particularly useful for trifold board design and performance backdrops. “For us, it’s a game changer,” says Hammerman. “They can have an idea, and then create and produce that idea within a very short period of time.” This is the first year they will be competing with this new asset, and their second time participating in NHD. “This year we’re sending 11 projects and representing 62% of the [Junior Division in Palm Beach],” he says, which is an impressive feat for Weiss, a small, non-profit school for the gifted.

Hammerman, who previously taught at public schools in Broward county, was recruited by Weiss to create a curriculum from scratch. NHD is at the center of this curriculum, allowing the students to delve into research-based, rather than content-based, learning.  “In the end,” says Hammerman, “the big skill we want them to learn is how to take a big question or topic and become the master of the answer.”

The printer allows for artistic freedom in the students’ projects, and offers an affirmed sense of creative autonomy. Hammerman has been participating in NHD for seven years now, and his passion for world history and cultures, combined with his NHD expertise, allows him to guide his students to success in the classroom and beyond.

“The moment of pride for me,” he says, “is the moment they walk into judging groups, knowing they’re prepared, and they come out with smiles.”