Adding Some “Pow” to the Party | LexJet Blog
BEGIN TYPING YOUR SEARCH ABOVE AND PRESS RETURN TO SEARCH. PRESS ESC TO CANCEL
Skip to content 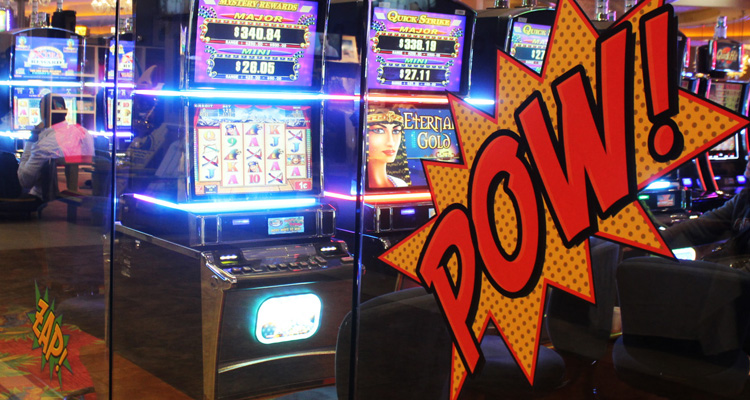 “This is really the first time we’d done a full-property-wide project like this — with floors and everything,” Wood says. “We needed to make sure we were using the right products.”

She says she leaned on the expertise of her LexJet sales representative, Matt Bailey, for guidance. “We knew we were going to use LexJet Print-N-Stick Fabric for a lot of the graphics. We’ve wrapped our elevators with it before, and we like the way it looks,” she says. “So when we were conceptualizing the theme for a particular area in the casino, I would give Matt the dimensions and tell him how long I wanted the graphics to be up, and he’d help us pick the right product to use.”

While Wood says she’s used a lot of Print-N-Stick for previous projects and knew it would be her go-to for the column wraps, doors, elevators and windows, she had some concerns about the floor graphics — especially those used outside. She opted for panoRama Walk & Wall.

“It’s not the first time we’ve used it, but it’s the first time we used it for such a large application,” she says. “Typically for an event, we’ll do four floor graphics on the casino floor. This time, we probably did 30. It’s also the first time we did anything outside, so we were a little nervous. We had issues with other vendors’ products peeling and stuff like that, which definitely wasn’t an issue this time.” It took the team about two weeks to print all of the graphics on their HP Latex 360 64-inch printer, and then cut them out. And with eight people covering the facility, it took them about a day to install them. “We did so much to carry the theme throughout the property,” Wood says. “It was a very cohesive look.”

The response was more than she could have hoped for. Guests of the casino and resort were delighted with the caricatures, and even took pictures with the directors and hosts next to their alter egos. “Our team absolutely loved it,” Wood says. “It was a topic of conversation for a whole week.”

The day after the party, Wood set about removing the graphics. It was just her and a boom lift, but it took her only a half of a day to remove the Print-N-Stick and Walk & Wall graphics, thanks to their easy-to-remove adhesive that peels off cleanly.

Now, Wood says, the team is already dreaming up New Year’s Eve theme for 2017. We can’t wait to see what these creative minds come up with.