A Gallery That Highlights Hope for the Homeless | LexJet Blog
BEGIN TYPING YOUR SEARCH ABOVE AND PRESS RETURN TO SEARCH. PRESS ESC TO CANCEL
Skip to content 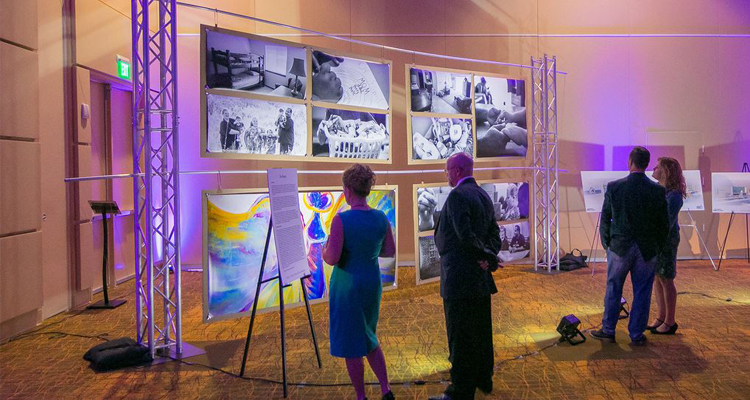 Green Bay, Wis., wedding photographer Mark Hawkins is the type of pro who stays connected to his clients. So when one of the brides he photographed asked him to help Freedom House‘s fundraising event, Gallery of Hope, he was happy to keep the connection alive, plus support a great cause that she worked for. Freedom House is a program in Green Bay geared to ending the cycle of homelessness by providing families with shelter, food, clothing, education, counseling, discipline and spiritual guidance. “Freedom House does all this awesome stuff for them, while not babying them at all,” Hawkins says. “And they have such an awesome track record.” According to Freedom House’s website, 92 percent of the families helped by the organization never become homeless again.

This year’s 12th annual fundraising event, themed the Gallery of Hope, was focused on raising money for the Bridge, a new property that would provide low-cost housing for families transitioning out of Freedom House. For the event’s gallery, Hawkins photographed all aspects of the goings-on at Freedom House, including residents, staff and volunteers. From those images, he created four mini galleries for the ballroom at the KI Convention Center in Green Bay. The galleries were organized by topics: Shelter, Education, Child Care and Bridge. Inspired by the Seattle 100 project by photographer Chase Jarvis, Hawkins mounted the photos on cardboard for the 8-foot-by-20-foot displays. He attached the images to the cardboard using bulldog clips. “Cardboard is all the rage right now,” he says. He used LexJet Sunset Photo eSatin Paper 300g, which was donated by LexJet, to print the mostly black-and-white images. He learned about LexJet’s media from Andrew Wredberg, a fellow photographer.

“I’m always worried about Dmax, because I print so many black and whites,” Hawkins says of his choice of using the LexJet eSatin on his Canon imagePROGRAF ipf8400. “I want deep blacks, plus the color is outrageous.” Robyn Davis, president of the Freedom House, said the goal for this year’s fundraiser was to create a different type of experience than the usual auction-and-rubber-chicken dinner. “We talked about telling our story through photographs,” she says. “We wanted to tell our story through the artistic lens of a camera … The photos captured exactly what we wanted … for people to talk about the photos. What is in the photo? What does it have to do with the topic? What does it mean?”

Hawkins four mini galleries were accompanied by a gallery of a former resident’s work, as well. “The results were stunning,” Davis says. “We got nothing but great responses from our guests.”

More than 300 people attended the event, which raised more than $50,000 for Freedom House.