Florida sun exposure and occasional spray paint typically result in a short life-span for outdoor signage, but thanks to the dye-sublimation print-transfer process and the UV-resistant properties of ChromaLuxe EXT, Felts could update the old signs with new ones that would require little to no maintenance. 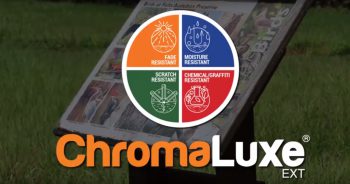 Two years ago, a local Eagle Scout troop created the original signs as a group project, so it was important that the heart and soul of those designs remain when using ChromaLuxe EXT to revitalize them. The signs are such an important part of the Felts experience, especially because of the busloads of third-graders that descend upon the sanctuary every year.

The local students get an opportunity to walk through the Preserve to help foster an interest in nature and science. Jim Stephenson, Secretary of Manatee Audubon Society, says that it’s been a successful program. “We’ve had as many as 1800 students come through during one school year. We teach them how to use binoculars or let them role-play the part of an Osprey. One student said it was better than a day at Busch Gardens.”

With as many as 200-300 third grade students visiting during these outings, the signs are instrumental teaching tools for the volunteers and must be legible, visible and sturdy. To get an idea of how many signs were needed, LexJet’s Reece received a quick tour of the grounds and found a total of 11 wayfinding and informational signs would need to be rejuvenated.

Working from the Eagle Scouts’ original artwork, which showed various species of birds, butterflies, and plants and Bee Hotel information, the new ChromaLuxe EXT panels were designed, printed and installed to the delight of the volunteers.

While summer is considered “off-season” for Felts, due to hot, muggy days and fewer bird sightings; when the weather cools off in November, the crowds – and birds – return. The bright new signs will help visitors of all ages and skill level – some from as far away as Europe or Asia – identify the flora and fauna at the preserve.

Since Felts relies solely on donations and grants for any improvements, LexJet offered to print and install the signs before the birds and birders return later this year. So far, the members and volunteers are impressed. “The signs were revitalized, giving them a new, longer life. They look great!” Wombacher says.

For more information on EPSON dye-sub technology or to order ChromaLuxe EXT, call your LexJet sales rep at 800-453-9538 or visit lexjet.com.