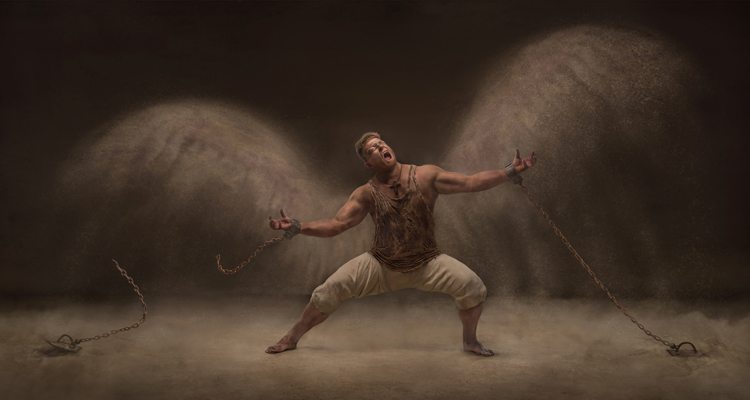 Last year, Kingsport, Tenn., photographer Brian Castle not only won a PPA Southeast District award for his portrait “Heaven’s Hands of Hope,” but he also took third place in the 2018 IPC awards, in which he saw stiff competition from all of the District PPA Sunset Print Award winners. Because he had such a personal connection to his 2018 award-winning image, Castle wasn’t sure if he could surpass it in 2019.

As it turns out, he not only exceeded his 2018 accomplishments, he blew them out of the water. He once again took home a Sunset Print Award for PPA Southeast District Portrait with “Sins Broken Chains” and, after the judging was finished at the 2019 IPC, it was revealed that Castle would take first place in this year’s competition.

“I was a handler at this year’s competition, so I put each of the competition images on the turntables for the judges,” he says. “It was a neat experience to see the live judging, especially since my image received a ‘Unanimous Loan’ from all five judges.”

Like his previous image, “Sins Broken Chains” came to him in a dream. “In the dream, I was in a dungeon with a family member who couldn’t get free of the shackles,” he says. “I dropped to my knees and prayed, this light came from above and Archangel Michael came and loaned me his wings to rip the chains apart so we could ascend to Heaven.”

To recreate the dream for his photo shoot, he knew it was going to take the right setting, light, staging and props. The day of the shoot was a true family affair. “My whole family was helping: my wife, my mom and dad,” Castle says. “My dad taught me how to shoot on a film camera, so who better to have on-site than someone who has experience and who can set up the lights.”

Castle says the actual shoot took about nine hours from setting up to costuming and makeup, as well as additional action shots to get the chains breaking. “We rented the basement of an abandoned department store, originally built in the 1920s,” he says. “I borrowed the pants from a local theater group, I bought a brand-new white t-shirt, ripped it with a razor and dyed it with teabags. I took theater makeup and smudged it all over to give me a dirty look.”

As he was shackled for the shoot, Castle had an unexpected emotional reaction. “I had these big logging chains attached to me and I had this quarter-inch plate shackle around my wrist, all I could think was ‘What did people go through back in Biblical days when they were chained like this?’ I teared up, it was emotional, I couldn’t hold it back,” he says. “The chains were so heavy, and they wore my arms and shoulders out. I felt the pain a little bit.”

One thing Castle has learned over the years is that it’s important to get every angle, light setting or version of a shot while the scene is set. “For example, to capture the broken chain, my dad whipped the chains and I photographed it several different ways to make sure I had enough for the image,” Castle says. “Newer photographers don’t know to get those extra shots. Through competitions, I’ve learned to think about editing before I’m through shooting, that way if I missed something, I can get it then and won’t need to redo it, later.”

Castle has accomplished quite a few things in 2019. Not only did he receive the top prize in the Sunset Print Awards competition for the first time, but he also completed his first two photography degrees: Master of Photography and Photographic Craftsman. “Now I am going for the Master Artist degree,” he says.

Castle says he uses the Sunset Bright Velvet Rag on his Canon PRO-4000 because the paper came highly recommended by fellow Sunset winner Kimberly Smith. “Kim told me about it, and I want every piece to be printed on Velvet Rag; I love it. I will never go to another fine art paper,” he says. “I know LexJet sells other brands, but that Velvet Rag produces more accurate colors, and it’s not as expensive.”

He also travels around the country for speaking engagements where he shares his experiences and success stories. “I travel from Memphis to Atlanta and from Florida to Virginia and I always mention LexJet and the papers,” he says. “I tell them ‘when you buy from LexJet, you’re not just buying the printer and the paper, you’re buying their customer service, too.’”

With another Sunset Print Award-winning image and a first-place finish in 2019, it seems that Brian Castle’s work really is the stuff of dreams.