Prints That Win: The Gentle Giant | LexJet Blog
BEGIN TYPING YOUR SEARCH ABOVE AND PRESS RETURN TO SEARCH. PRESS ESC TO CANCEL
Skip to content 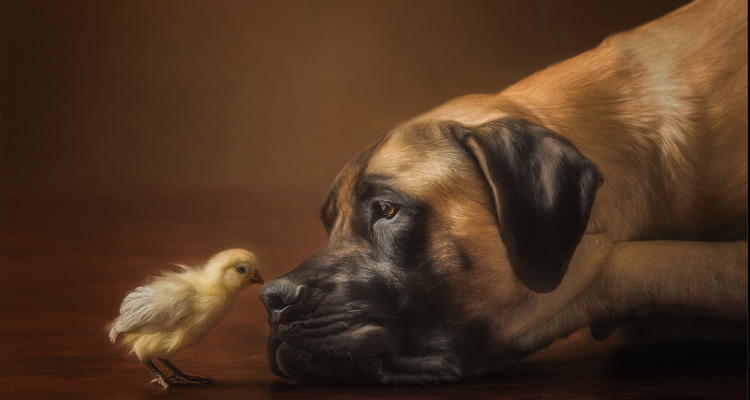 “The owners want to see the dog’s real personality. They don’t want to see their rambunctious pet sitting and staring into the camera, looking forlorn. That’s not how the dog acts at home, so why should I capture that behavior for their photos?” The dogs are encouraged to have fun, especially with a studio full of toys.

Pet photography was not the path Hargrove expected to take. She initially started with family and senior portraiture. While she still works with human subjects, it’s the dog sessions that she truly enjoys photographing.

It was a twist of fate – and a goodwill gesture – that led to Hargrove’s first photo shoot with dogs. A local breeder reached out to see if she could photograph the new litters of puppies. She offered the breeder a free session and the rest is history. She continues to work with breeders and has done fundraisers for K9 Police officers, but it’s her regular customers that always keep her on her toes.

While a natural affinity for animals helps Hargrove get the most of her furry and feathered subjects, it’s really during competitions where she learns the most about herself and her craft.

“These PPA events can be brutal and highly competitive,” she says. “But I always learn something. Getting feedback is important and the judges want us to grow. From new techniques to submission choice, there’s always a lesson to be learned. For instance, I had two separate prints of a Bull Mastiff and an English Mastiff, but the judges thought it was the same dog. From that show, I learned that I can’t use prints of both dogs in the same competition.”

Hargrove also enjoys printing and feels it’s a lost skill in the digital age, “there’s as much art in the printing as there is in the photography,” she says. With social media, cloud storage, and memory cards, many people aren’t printing hard copies these days. Hargrove disagrees with that trend. “It’s important to have those images in hand. Print everything. Those are memories. If your computer crashes or you lose that card, those photos are gone.”

One of Hargrove’s favorite photo papers is LexJet Sunset Photo eSatin Paper 300g. With a feel reminiscent of old-school darkroom developed images, eSatin is perfect for photographers – like Hargrove – who have discerning clients.

The passion that Jen Hargrove has for her work, her furry clients, and for printing is always on display. “My walls are full of framed memories and I will always cherish them.”