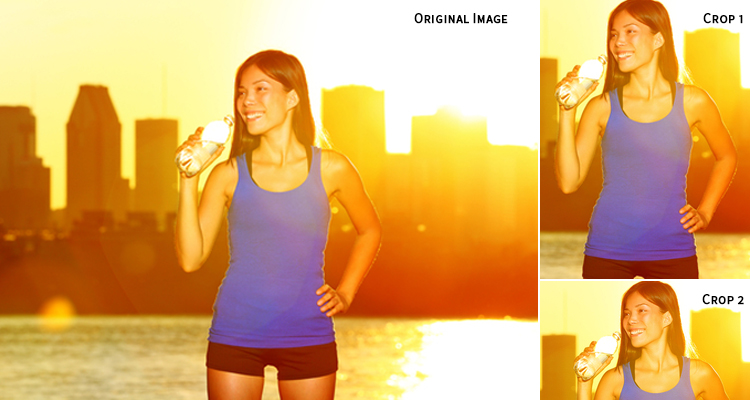 If you’re creating an image that features a specific product, you’ll want to keep potential cropping requirements in mind so the image can work multiple ways. Consider the example above: A person drinking a bottle of water, which is the customer’s product.

In the photo, there could be a horizontal crop from the chest up (crop 2) leaving space to the right or left that could be used for web or billboard marketing. The exact same image could be cropped vertically for a magazine ad design (crop 1). However, the exact same image created with the person holding the drink by their waist, as shown below, would limit to a vertical crop (crop 1).  In this case, a horizontal crop may cut the drink out or have it too low in the composition and not as prominent as a client would want (crop 2). Knowing this in advance will give the photographer cues to any product placement, lighting and posing necessary to give the right message in the final piece. Beyond the directional format of the piece, knowing if there will be test on the image [or surrounding the image] gives the photographer further information.

Often within a company, teams are put together on specific campaigns based on how well they communicate with one another and outside contractors.  These contractors, like photographers or graphic artists, are typically chosen based not only on their talent level, but also their ability to take instruction and create pieces that fall within the parameters of the original creative intent.

Having a creative process that begins in the conceptual stage with rough drawings of the final piece, relaying that information clearly to those who follow and working together is always key. Also key in that conceptual stage is knowledge of the message to be sent, and all the elements from images to be used, to the layout, and the design graphics. Taking a couple of small compositional cues from above will hopefully help out.