A Transitioning Neighborhood Captured in Portraits | LexJet Blog
BEGIN TYPING YOUR SEARCH ABOVE AND PRESS RETURN TO SEARCH. PRESS ESC TO CANCEL
Skip to content 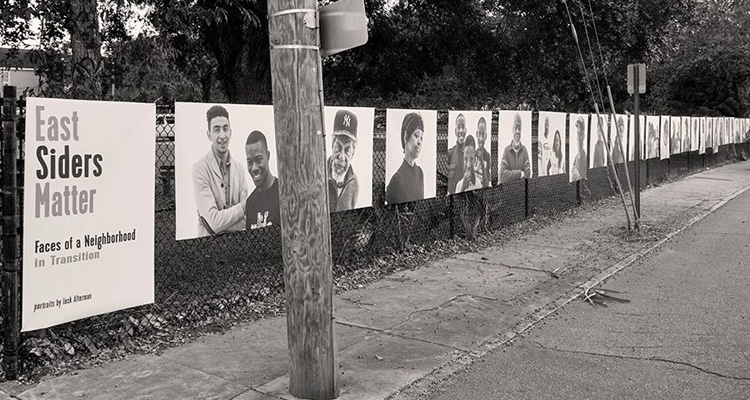 To capture the essence of the neighborhood’s long-term and current residents, Alterman began shooting portraits of them, which he later displayed on a chain link fence along Columbus and America streets. His project, East Siders Matter, includes 34 black-and-white portraits printed on LexJet 11 Mil Blockout Water-Resistant Polypropylene using a Canon imagePROGRAF 8400 printer to produce the 42-inch-wide prints.

For several weekends, Alterman would set up a pop-up photo booth on the street and asked passersby if they would agree to having their portrait taken. He also asked them all the same interview questions: What was it like here five years ago; what’s it like now; what will it be like in the future?

“The answers were all basically the same: It was bad; it’s a lot better; and we’re not sure,” Alterman says. In years past, the neighborhood had been considered dangerous, drug-ridden and violent. The neighborhood is considered much safer these days. Alterman timed the display of his portraits with an October event, East Side Week, which celebrates the neighborhood, encourages non-violence and honors its history. The purpose of the outdoor portrait project, he says, was to put a face on the neighborhood, and get people to look at it as they walked or drove by, “rather than putting the photos in a gallery that was out of context altogether,” Alterman says.

The individuals in the photos, he found, were as diverse as they could be — there were small business owners, attorneys, families, recent immigrants, students and more. They were all contemplative about their neighborhood’s future, which is reflected in their expressions. “Art can inspire this kind of conversation and have a platform to stand in front of, in this case,” Alterman says.

East Siders Matter has received news coverage and a renewed interest in the area’s history and residents, Alterman says. “I’m really enjoying it. It’s all about: How do you make your photography matter? I’ve got the skills; I’ve got the talent; now how do I make a difference?”