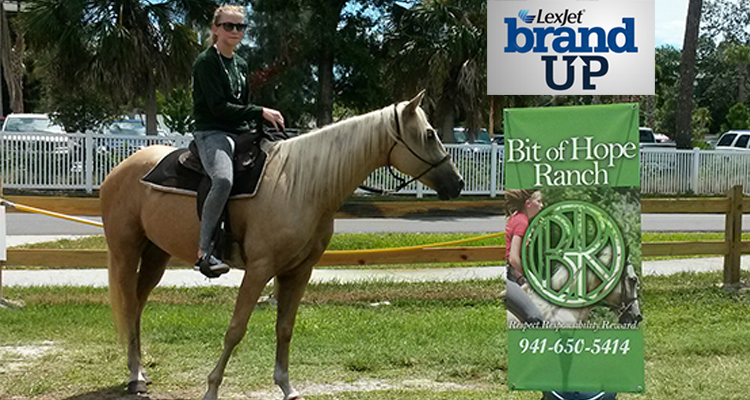 Suzanne Park spends her time at Bit of Hope Ranch rescuing horses and training kids how to care for the animals and work the ranch. While she certainly knows the value of branding, logos and marketing items, it’s easy to see how these things aren’t necessarily at the top of her list.

Bit of Hope Ranch is a non-profit organization in Englewood, Fla., that rescues and rehabilitates horses from a variety of backgrounds and offers them for adoption. They offer low-cost riding programs, school visits and more while offering kids the chance to gain volunteer hours by working with the horses and learning respect and responsibility. The group often attends community and horsing events to raise awareness about their program When the LexJet brandUP crew contacted Park about new banners, she was thrilled. “We had some old banners from the early 2000s that were just white with green letters, so I thought a nice, new little banner would be cool,” she says. “But I had no idea the length they were going to go through to make them so personal. They’re amazing.”

“The banners help us connect to the people,” Park says. “Without a banner at events, they don’t really know who we are and what we’re doing.” The group first used the banners during the Labor Day Parade, where a parent of one of the participating children lined a banner with PVC pipe so it could carried in the parade and hung in tents.

Since they’ve been using the banners, Park says she’s noticed an increase in activity. “It ties in so well because we have a [livestock] brand that we put on our horses that allows people to look up the brand and found out about the horse,” she says. “Now that the brand is on the banner, more people are recognizing it. We’ve exploded in the last month, saying ‘I’ve seen that brand.’ It’s really neat.

“I had no idea what it was going to mean to us.”